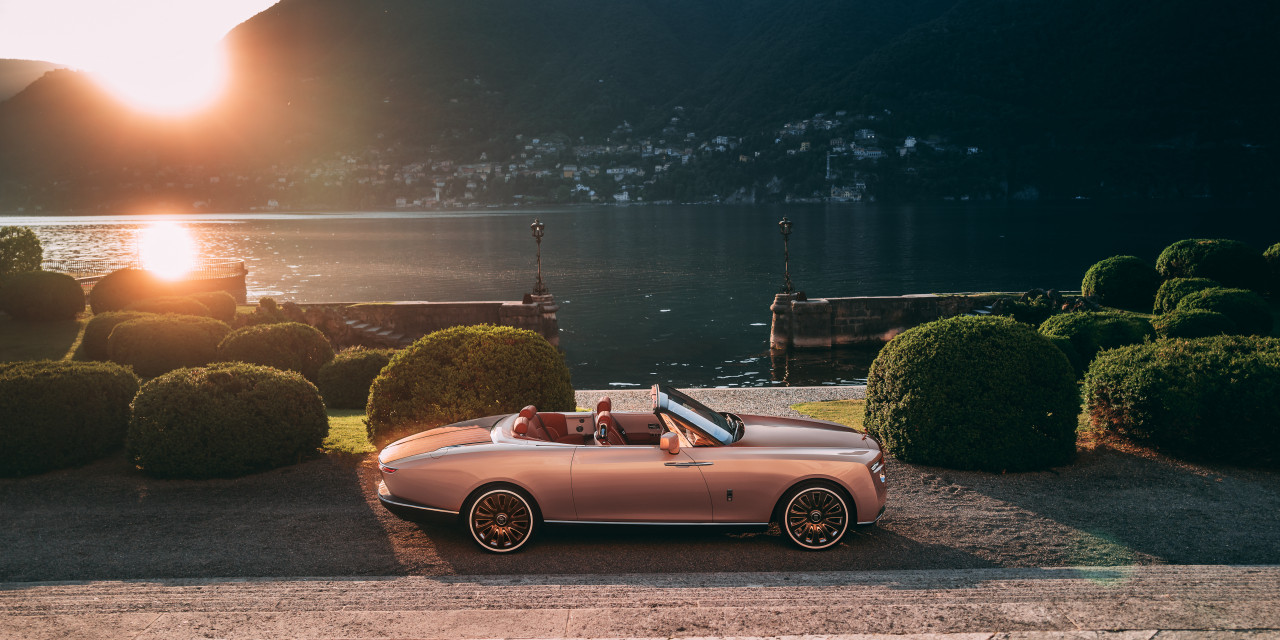 Alex Innes has the kind of job that automotive designers salivate over. As head of coachbuilding at Rolls-Royce the talented designer turns peoples’ dream cars into steel shelled works of art. The term ‘bespoke’ doesn’t quite cut it here. Like other luxury manufacturers, Rolls-Royce has customised its cars since time immemorial, be it through vibrant colour schemes; tasteful alterations to interior fabrics; or sentimental inscriptions. The coachbuilding scheme, on the other hand, is the automotive equivalent of haute couture.

As head designer Alex oversees the entire process: from brainstorming and planning sessions to preliminary sketches, early prototypes, and adjustments in the workshop. Essentially, he takes a figment of someones imagination and turns it into a purring motorcar.

A case in point: The Boat Tail. Hand-built from single sheets of aluminium with a delicately swooping frame – gently curved but not too much – the car made its long awaited debut on the sunkissed shores of Lake Como this summer. Commissioned by a pearl mining magnate, hence its oyster brown hue, the vehicle pays subtle homage to the 1930 Rolls-Royce Phantom II Boat Tail and emulates the distinctive outlines of early 20th century racing yachts. Unveiled in the picturesque surroundings of Villa d’Este at the world famous Concorso d’Eleganza car show, it made quite a splash.

Mayfair Times headed to Como’s crystal blue shores to catch a glimpse of this rare and remarkable feat of engineering. It was the perfect place to chat to Alex about the design process behind it. 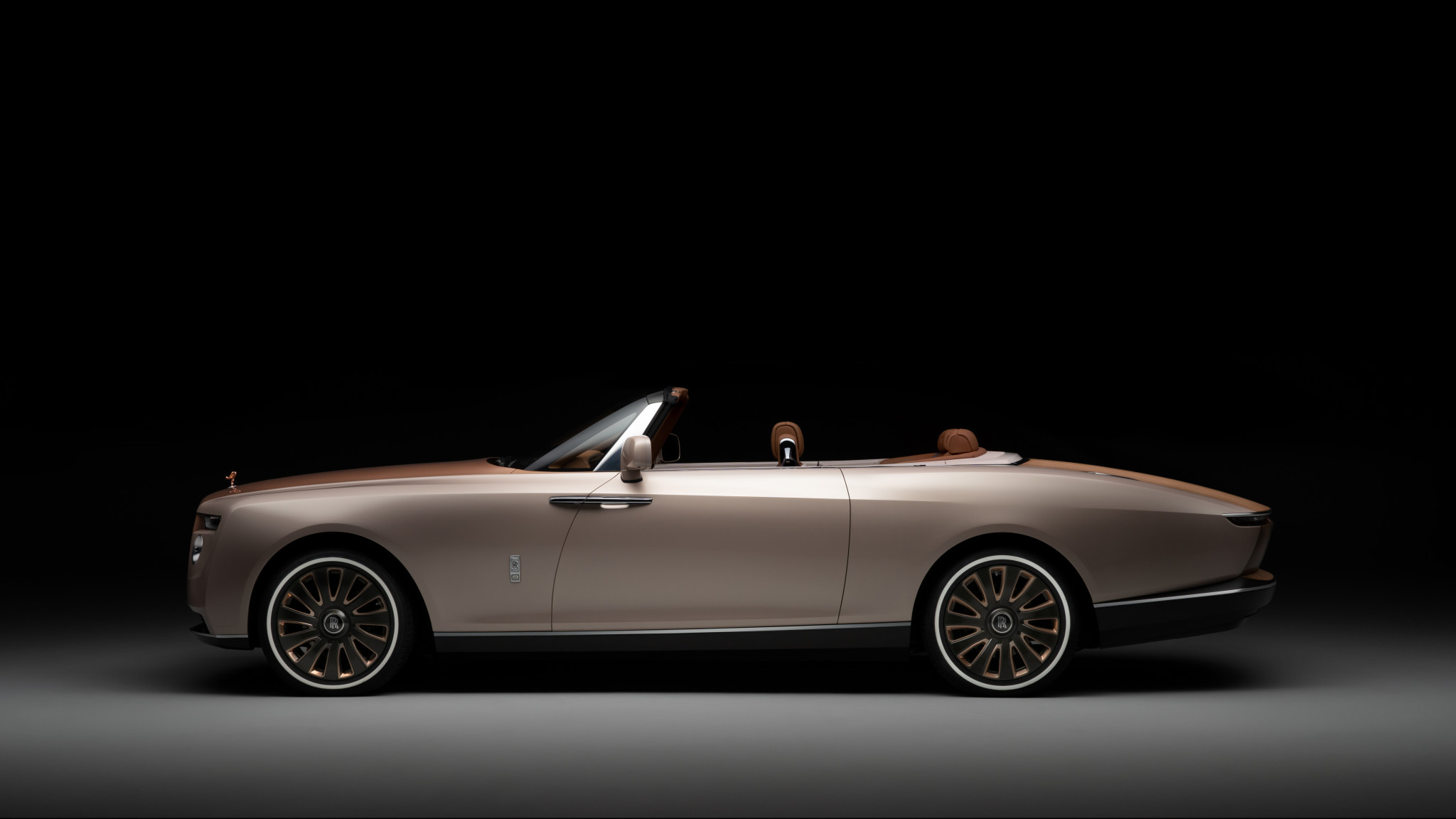 This car has taken just over four years of development from the first sketch through to completion. Where do you start with something like this?

For us it’s always the sketch work. We were fortunate to be a part of this project where we had the ambition to create a modern interpretation of the boat tail body style, and indeed, the client was also equally interested in creating something extraordinarily unique. That level of trust is not lost on us. 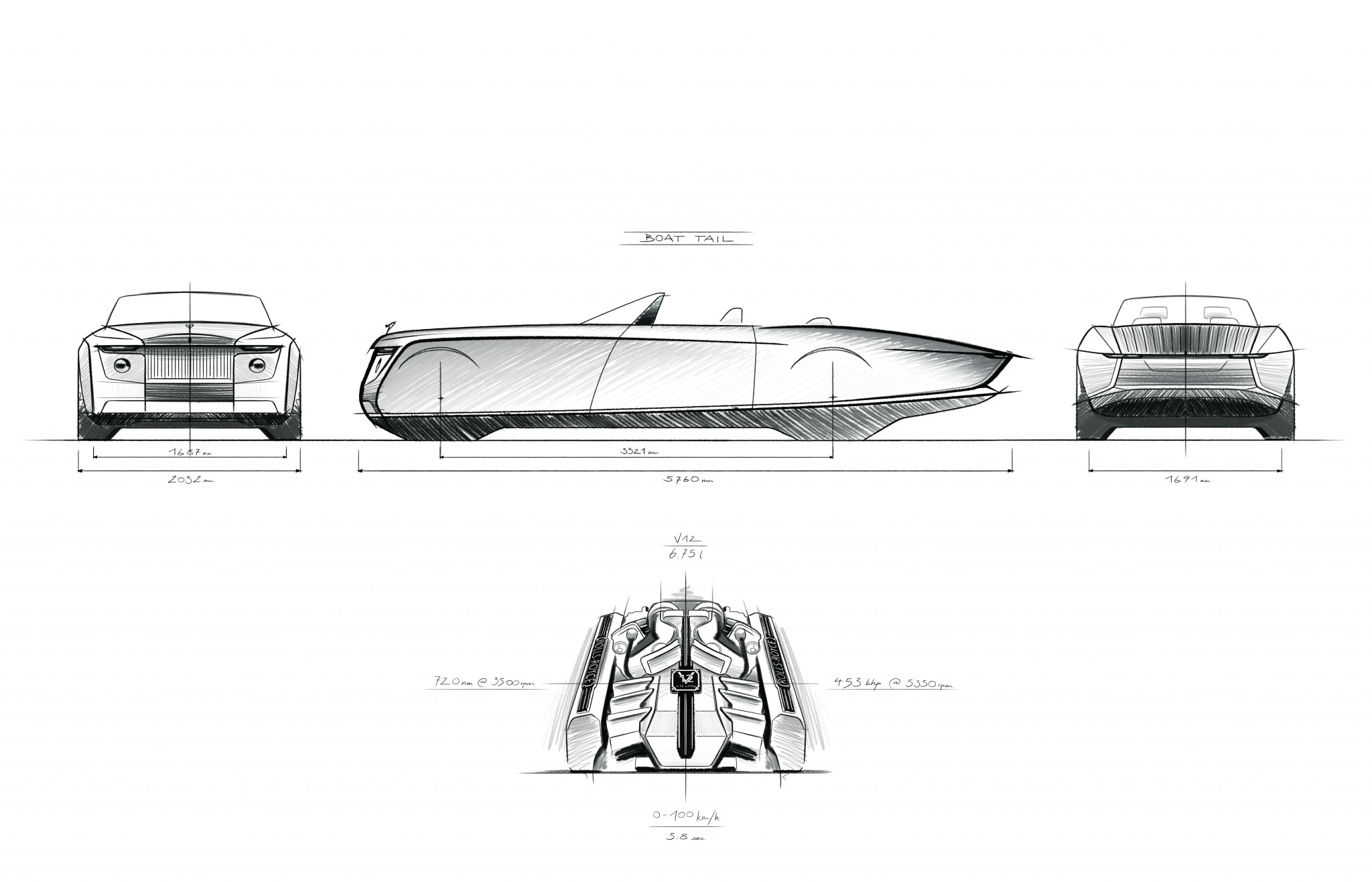 What are some of the major design challenges that you had to overcome?

I think the real power of the story is this combination of traditional handcrafted techniques to achieve a very modern design. It’s a very modern shape and we use hand craftsmanship to create that shape and exploit it so that there are no panel gaps, everything you see is completely uninterrupted. We wanted to fashion it so it’s almost like it’s a work of sculpture. And that, of course, you can only achieve through manual techniques. So it’s a hammer formed car by way of aluminium. And then of course, it’s carefully fettled to give you this purity and cleanliness of shape.

The lines on this car are straight, but also sweeping and curved somehow. How did you achieve that effect?

What we wanted to convey was that sense of elegance, there is a lovely movement to all of the linework: the gentle fall of the feature line, the upsweep of the lower line work. There is this wonderful sense of grace and movement so that it almost looks like a motor launcher rising out of the wake. You can imagine it on the water. And that for us was this nautical influence. Yes, there are material influences, but we didn’t want those to be so explicit. We wanted the character, the gesture of the car to have that grace and elegance that you only really see with yachts and with other nautical crafts. 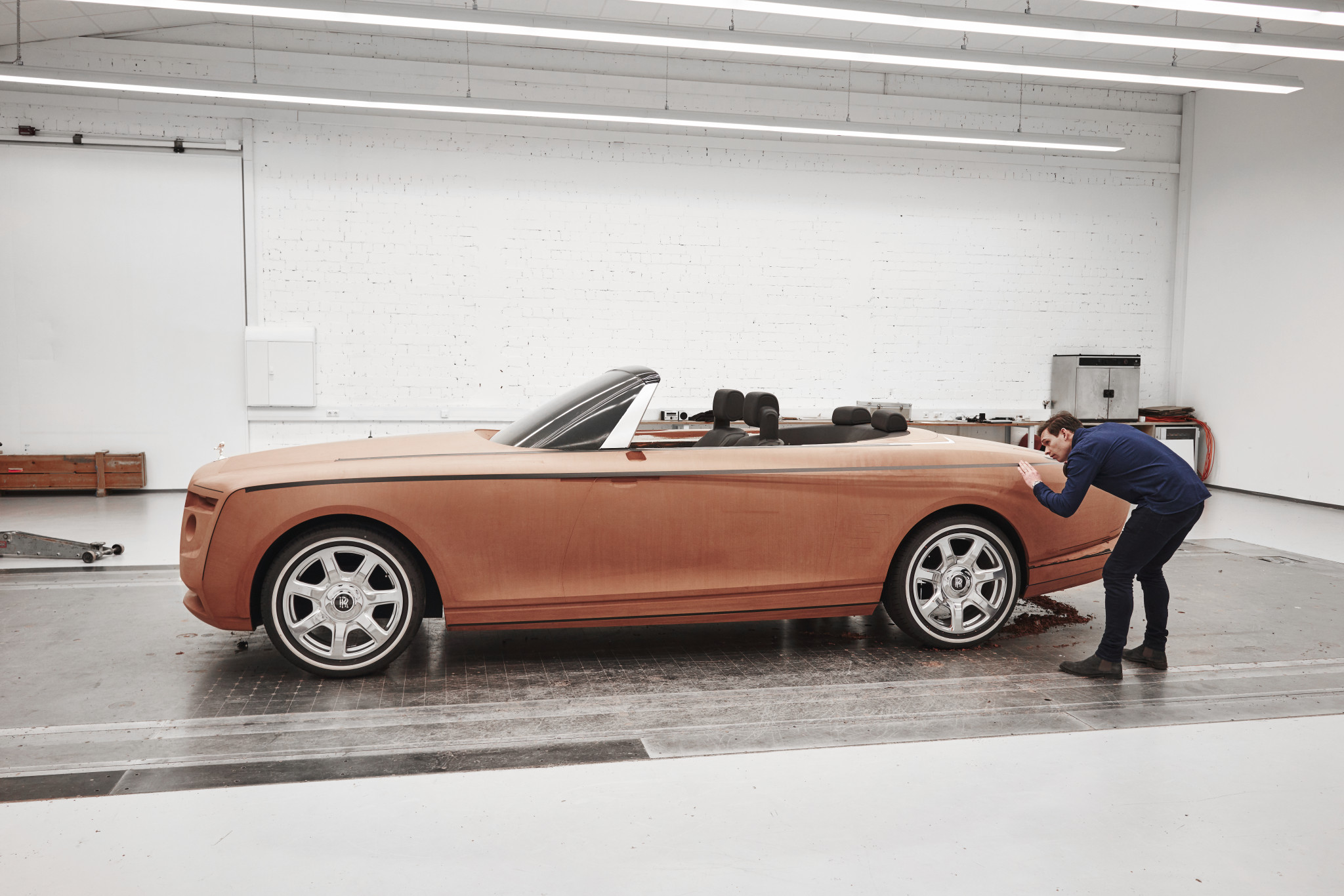 The car has a very unique colour scheme which seems to change with the light. How did you achieve that?

The colour is born from the clients’ affiliation with the pearl industry. Getting the colour right was quite painstaking. It went through many iterations and there was this extraordinary moment in the project where the client arrived in the design studio with four mother of pearl shells and said somewhere in there is the colour of my car. So they picked the shells from their private collection.

What’s extraordinary is the fact that you have that variation, so we all know that the pearls will vary depending on their environment. The client wanted that behavioural change in the paint itself. That’s why we mastered this combination of the pearlescent and the metallic to create that variation. When we were shooting the car we noticed that it had a red pink hue to it that was completely different to what we had in the studio. And it’s like… the camera doesn’t lie. That’s the environment.

You strike me as a perfectionist. When do you know the car is done?

As designers we always say we’re never done. We just ran out of time. 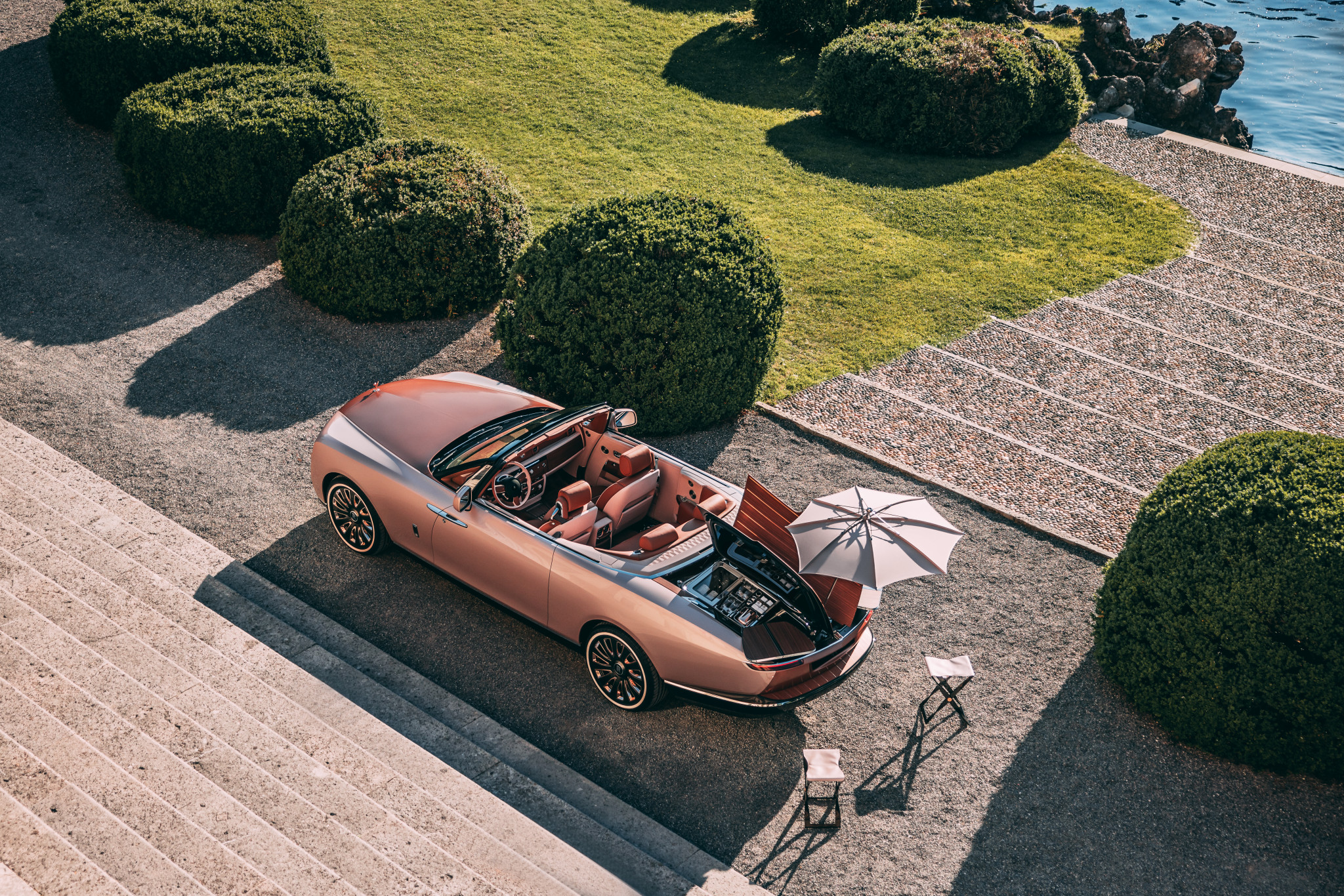