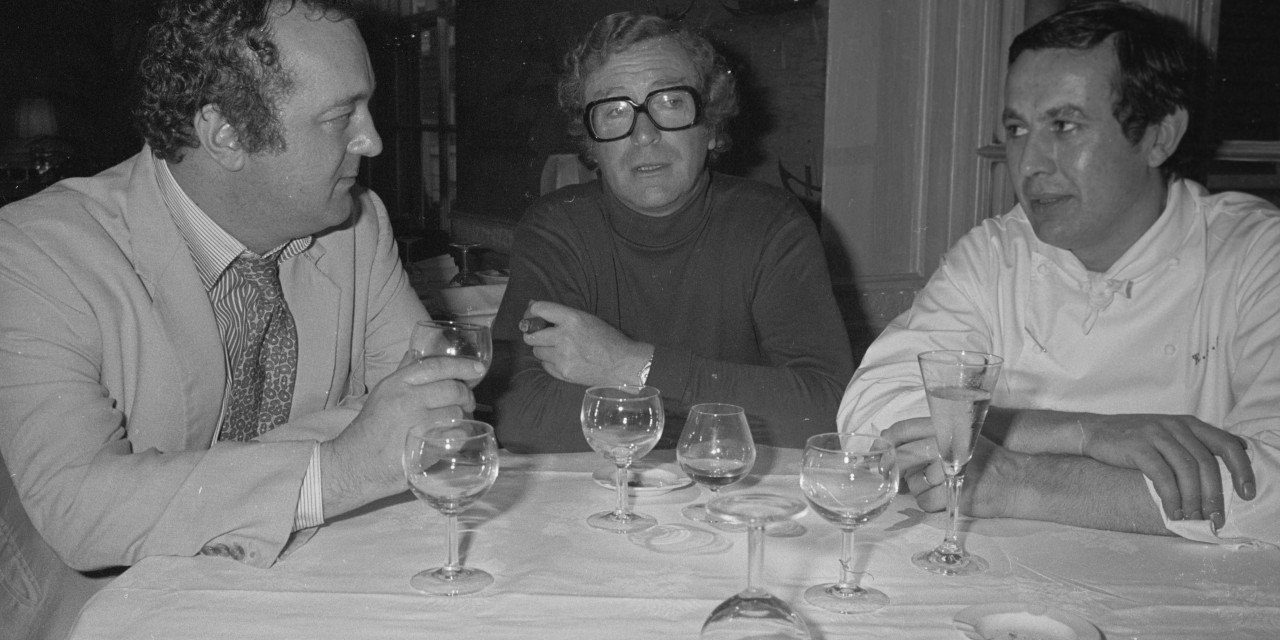 As legendary Mayfair brasserie Lagan’s reopens, photographer to the stars Richard Young shares the stories behind some of his favourite A-list pictures captured in his new book.

It was the brasserie that became home to the biggest names in showbusiness. For decades, Langan’s was the place to razzle-dazzle; a restaurant in Mayfair’s Stratton Street which drew a constellation of A-list stars. “Langan’s was to the 70s and 80 restaurant crowd what Tramp was to the nightclub scene in the same decades; anybody who was anybody lunched or dined there regularly,” says Dame Joan Collins. Hollywood icons, rock stars and royalty allude appearances; Jack Nicholson, Elton John, Rudolf Nureyev, Elizabeth Taylor, Princess Grace of Monaco, Omar Sharif. Much of the esteemed guestlist – which even featured Prince Andrew enjoying its affordable prices long before he discovered Woking’s Pizza Express – have now been immortalised in a new book capturing the colourful social whirlwind.

It was, according to legendary photographer Richard Young, “singly the most iconic restaurant in the world.” And he should know; Richard was there from the very beginning, arriving on his Harley Davidson to capture the raucous antics of the rich and famous.

“In the 80s, Langan’s seemed to be at the sticky centre of a great social sponge cake that oozed celebrity,” says Brian Clarke. “Richard’s photographs were an essential part in the creation of the legend.”

Langan’s first opened in 1976 by Michael Caine and restaurateur Peter Langan after spotted a gap in the market for a brasserie. Peter scouted the location and was responsible for design and decor (artwork on the walls came from friends such as David Hockney) and Michael helped finance it. A year later, Richard Shepherd became a business partner and it wasn’t long until “every major celebrity started showing up at Langan’s if they were in town.” “Everyone wanted their photograph taken outside the iconic door,” says Richard. “At the beginning I was the only photographer, I had Langan’s to myself. After a couple of years, word got around and other photographers started hanging out… Then it became a little more frantic, but fun. I was still the only one who had inside access for many years. There was an unwritten rule that I wouldn’t take pictures inside, but being the cheeky boy that I am, I sometimes broke that.”

“Richard Young was the first photographer on the scene,” writes Michael Caine in the book. “He would hang outside capturing all the big names and eventually, he became part of the Langan’s family.”

Reopened in October (daily for breakfast, lunch and dinner) restaurateurs Graziano Arricale and James Hitchen want to bring back “the feeling that the London of old has returned”. The plan is to reclaim the elegance and eccentricity of the original Langan’s, captured so irresistibly by many of Richard’s pictures.

I came up with the idea of capturing the three boys to mirror the original David Hockney painting of them on the top of Langan’s menu. It was easy to get Peter and Richard, but it was tricky to get hold of Michael as he was away making movies. I had to wait a few months to get the three of them together, but it was worth it. I shot this upstairs in the Venetian Room with natural light. It’s one of my favourite photographs of this unique trio. 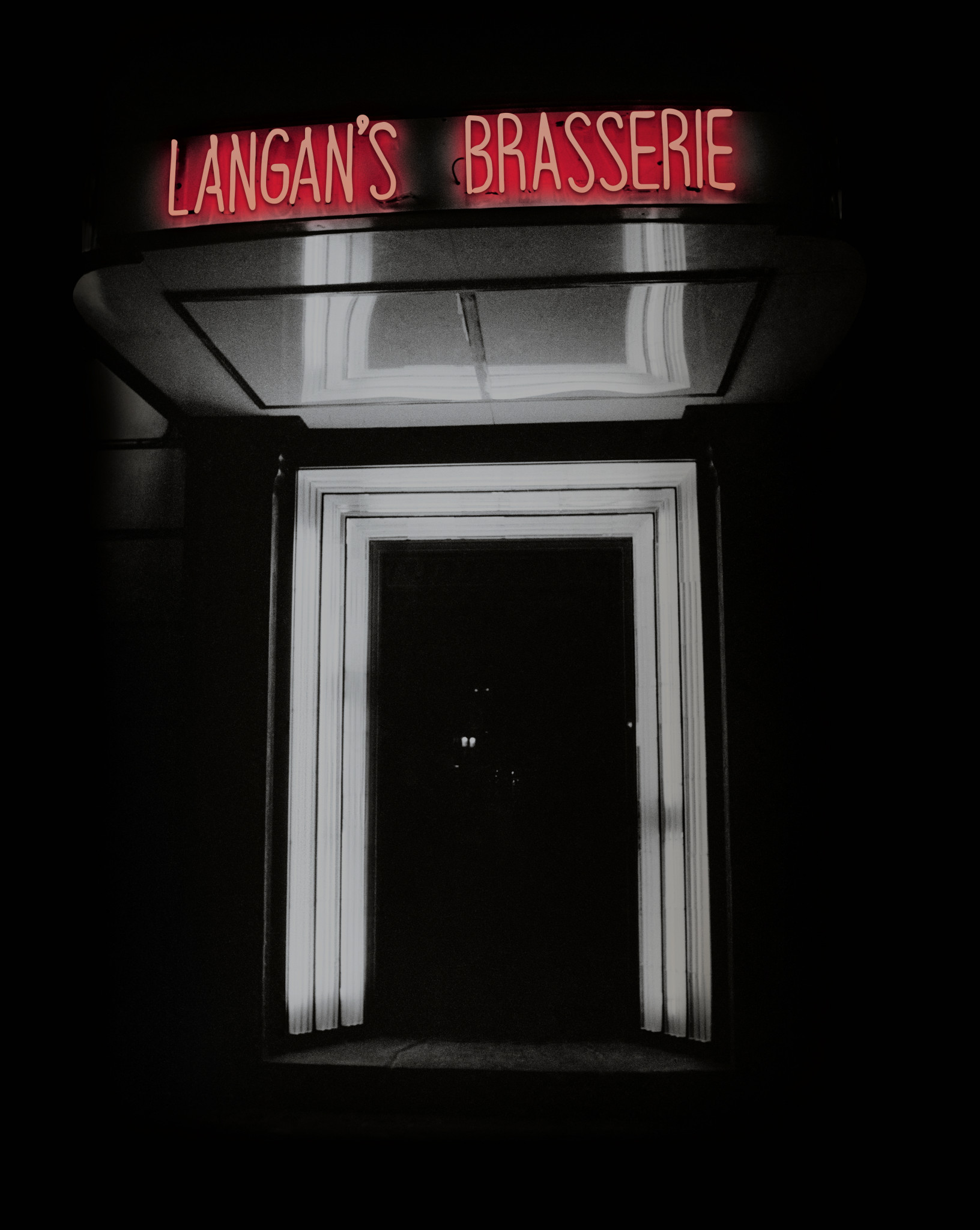 The door was the most perfect backdrop. The lighting was amazing and everyone looked fabulous. I’d always get a buzz when I saw who was on the first three tables by the window. I loved the adrenaline rush when the stars would get ready to leave – I’d dash out and get into prime position, right in front of the door. Everyone loved to ham it up for the camera or pretend to be coy. If they’d had a few drinks or were with someone they shouldn’t be with, it would get really animated, especially if Peter or Richard came out to join in the fun.

I’d been shooting another event and turned up at Langan’s around 10.30pm, as I always liked to finish off the evening there. I could hear upstairs in the Venetian Room a big chorus of “Happy Birthday to You”. I asked the barman who was celebrating, and he said “Mick Jagger”. You’ve never seen anyone run upstairs so quickly. I raced up and just managed to capture Mick blowing out his birthday candles. I was really surprised that he didn’t tell me off as he can be quite moody. The photograph was a world exclusive and it went everywhere. Thank God I was in the prime of my fitness! 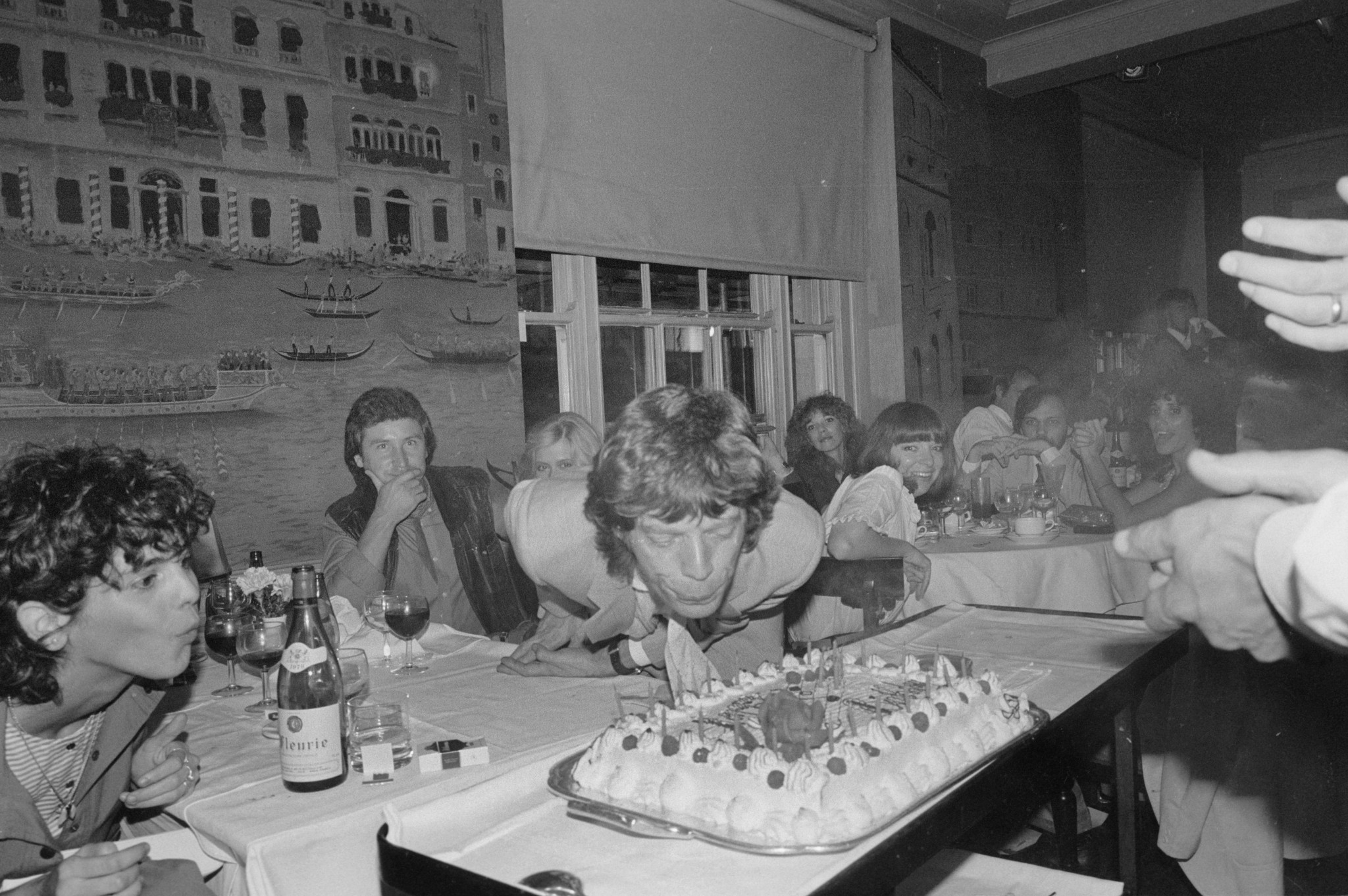 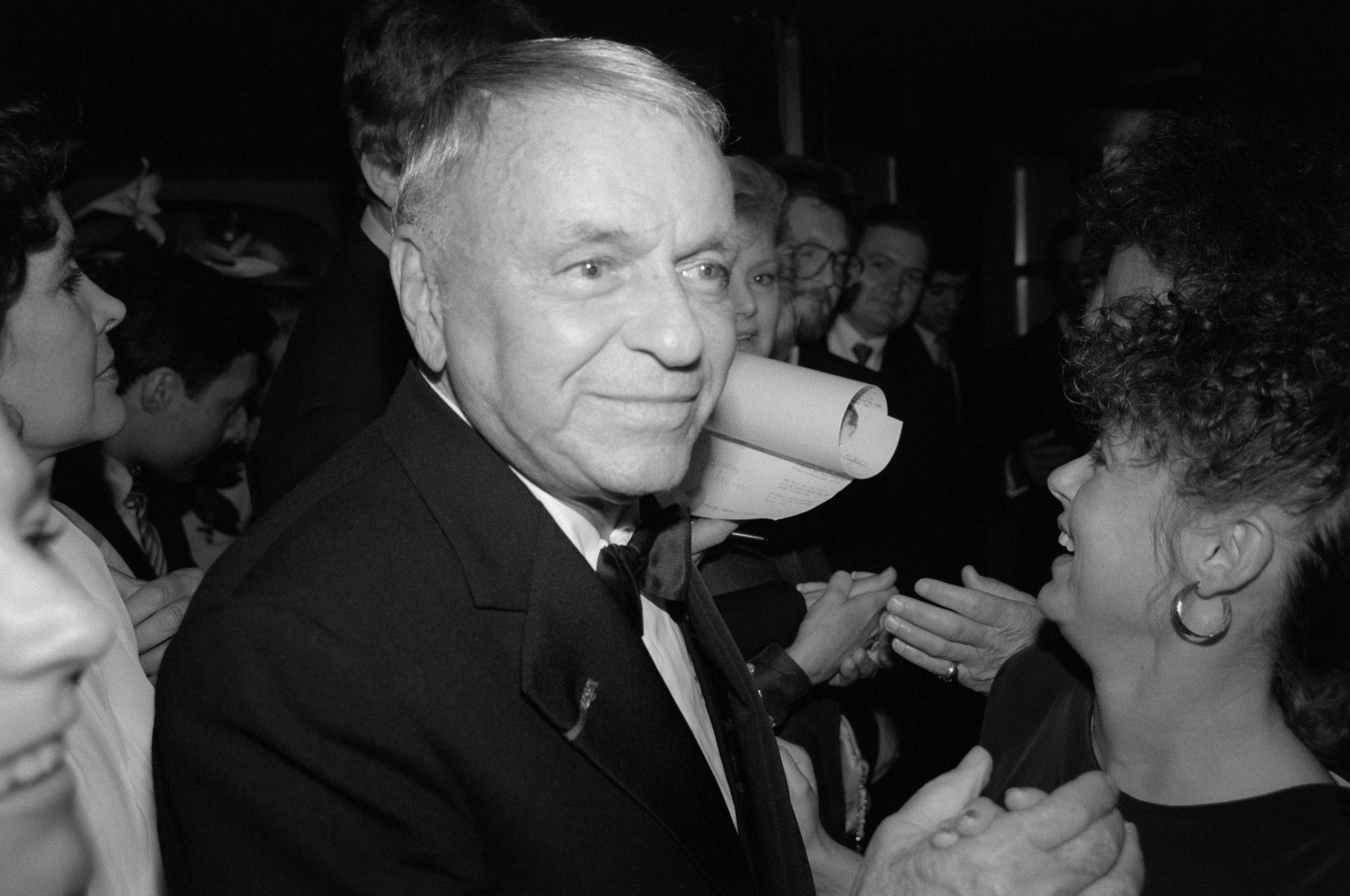 I was already at Langan’s for Michael Caine’s annual summer party – Michael usually liked me to go upstairs and take some photos. This evening, I was asked not to shoot upstairs in the Venetian Room because there was a very big name attending: Frank Sinatra, who was arriving after his concert at the Royal Albert Hall. Well, there was no way I was going to walk away from this. From the minute Sinatra got out of his car, it was mayhem. I started shooting from the pavement as he walked through the throng of people gathered outside. I continued walking backwards, pushing the crowds out of my way until we all eventually ended up inside. As he walked into the room the whole restaurant stood up and clapped. I’ve never seen anything like it, it was electric. He was very graceful and thanked everyone. Then he went upstairs to join Michael at the party.

I published my first book, By Invitation Only, in 1979. The iconic publisher, Naim Attallah, took a chance on me. I’d only been a photographer since 1975 and I was so thrilled he believed in me. The exhibition was held at the Olympus Gallery by the Ritz Hotel. The after-party was of course at Langan’s and I was astonished at the people who supported me – all the diarists, aristocracy and various celebrities attended. I really felt that I had arrived.

Langan’s Brasserie is out now, richardyounggallery.co.uk 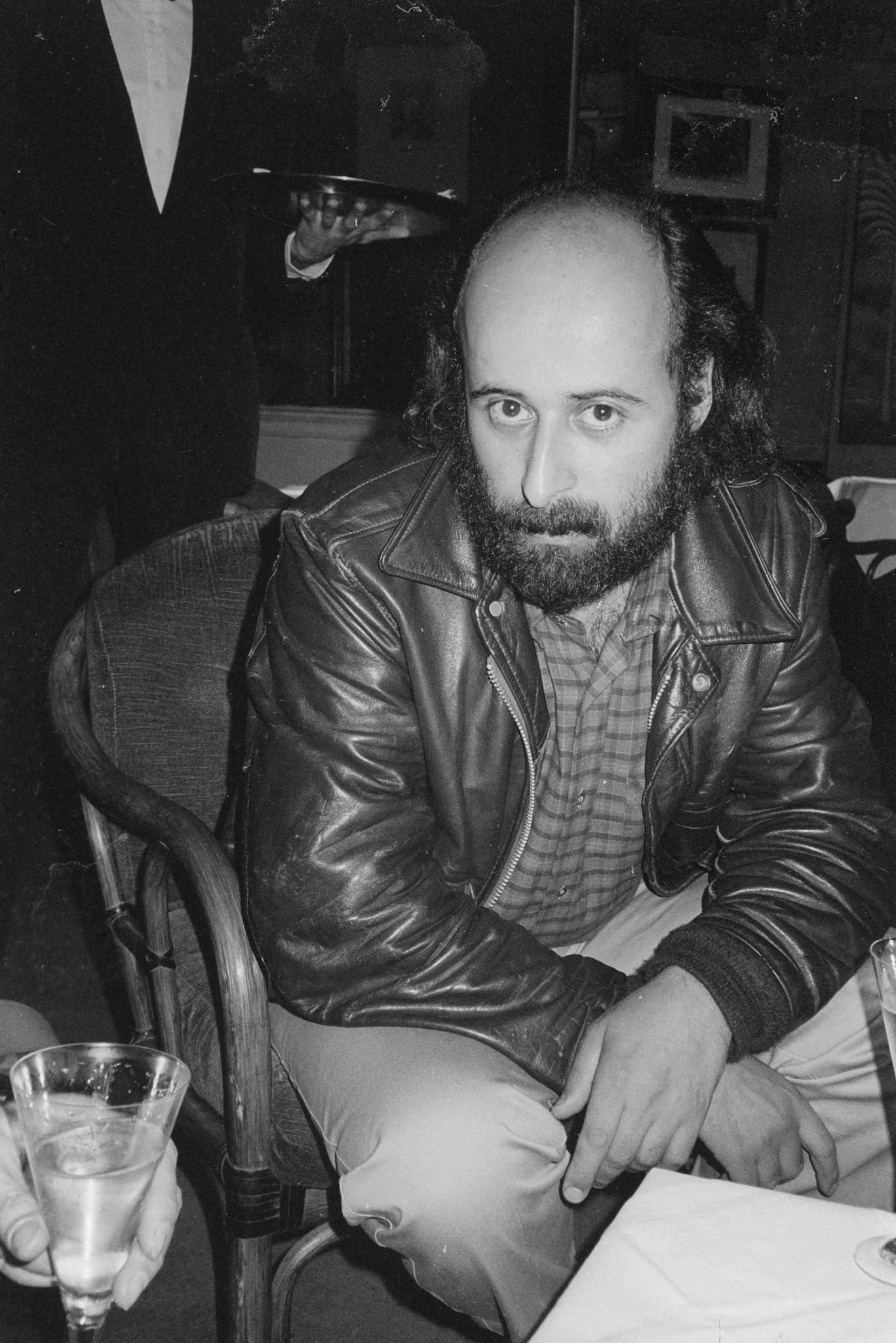