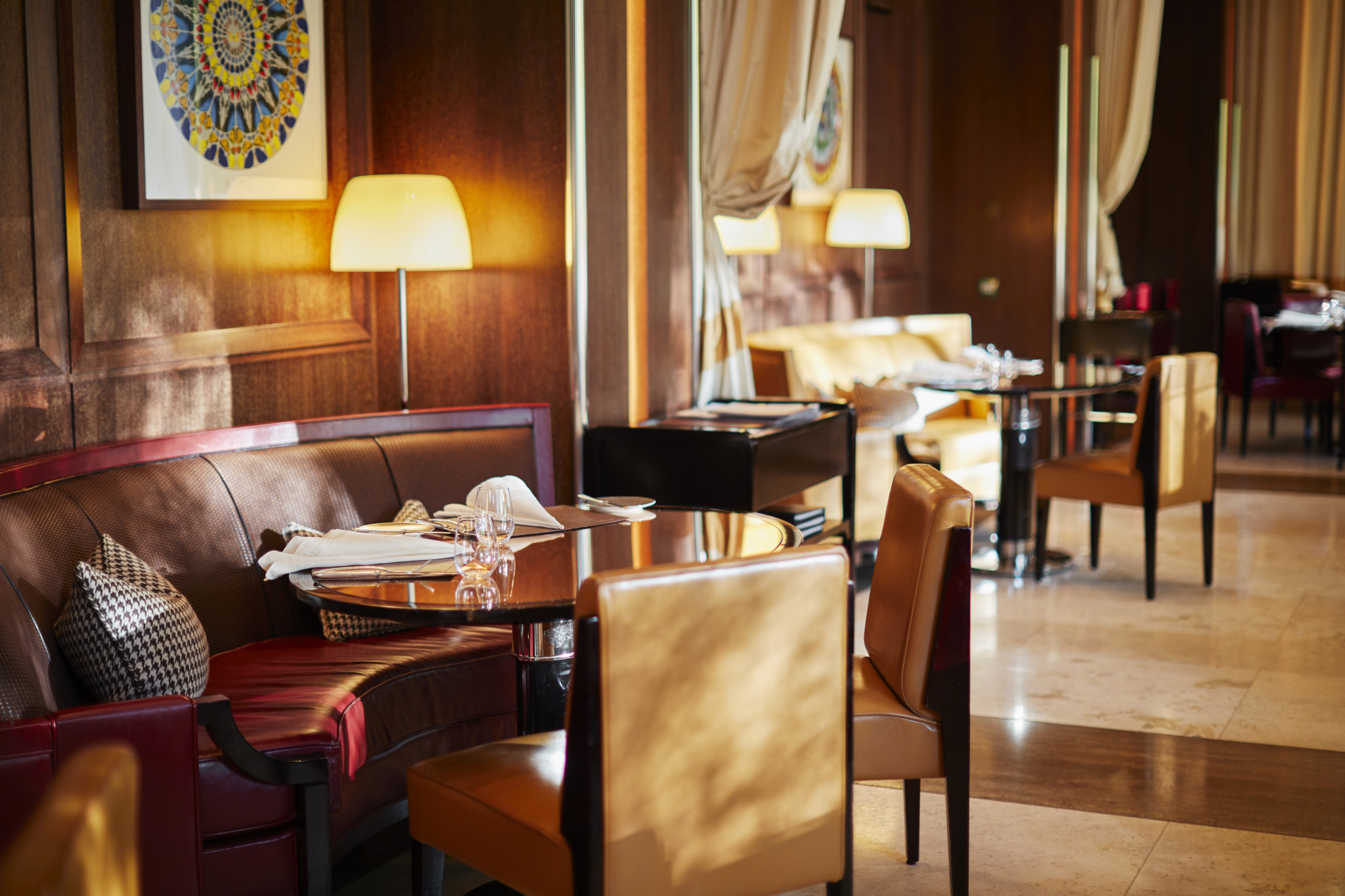 The hospitality industry may have had its challenges, but it hasn’t prevented a new wave of chefs arriving on the scene. We catch up with four who are making their mark 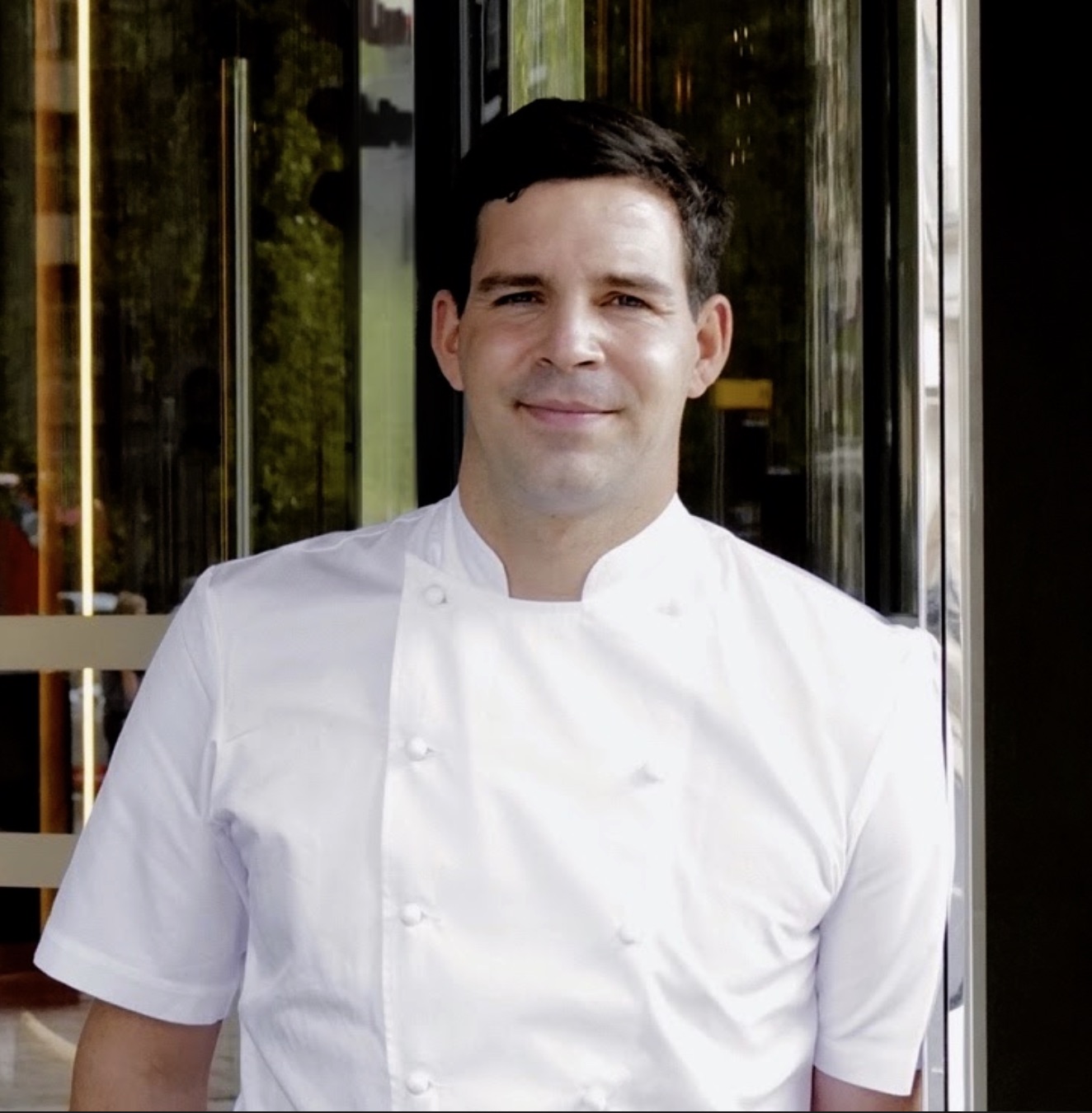 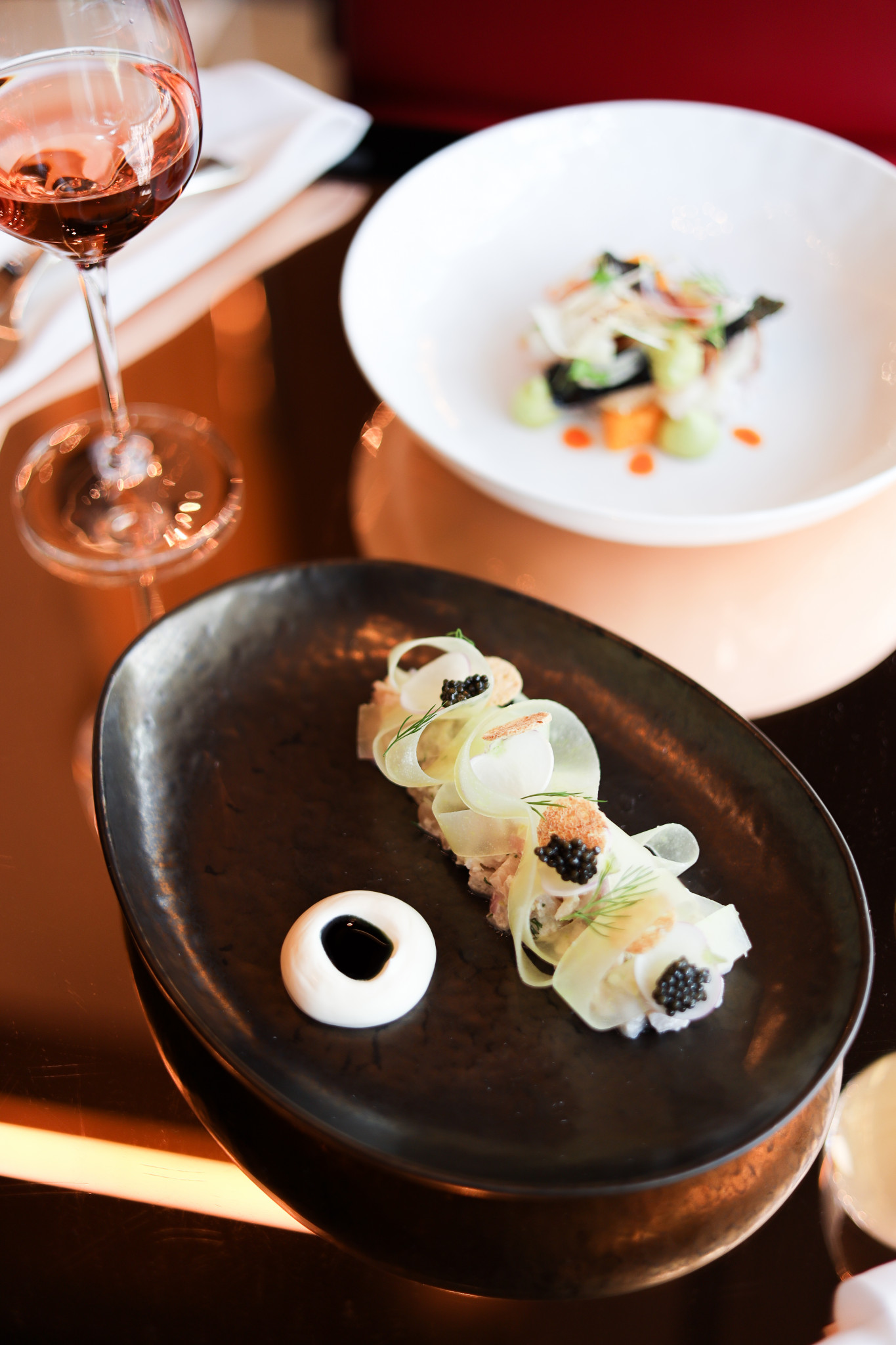 Jamie Shears has recently taken on the task of overseeing the culinary direction of 45 Park Lane: one of the Dorchester Collection’s hipper hotels. Foodies in Mayfair and St James’s might have sampled Shears’ cooking before – most recently he was heading up the kitchen at the instant-classic 45 Jermyn Street – as well as working with the likes of Gordon Ramsay and Chris Galvin.

Now, his priority is further developing the menu at CUT, the hotel’s restaurant from another iconic chef, Wolfgang Puck – a tough task, but Shears is up for the challenge. “I’m focusing on locally and sustainably-
sourced ingredients from the UK, including introducing

British Wagyu from the south coast, where I’m from,” he says. “I knew that the menu was already loved by its guests – so my priority was to focus on areas where I could bring my expertise, in particular, with new fish, vegetarian and vegan dishes, while also enhancing the Californian flavours on the menu.”

Ingredients are everything, says Shears, who is dedicated to putting the spotlight on the very best our country has to offer. “From day boat Dover sole from Cornwall, hand-dived scallops from Orkney, to full-blood English Wagyu beef from Suffolk, I source the majority of my ingredients from the British Isles – and, if I do need to source further afield, I only select the absolute best.

“I also believe you should treat your produce with absolute respect when cooking. This is something I really encourage my team to do.”

Shears believes that Mayfair is home to some of the world’s best restaurants – and that it’s good for chefs like himself to have such esteemed peers. “I love being part of such a competitive market – it keeps you at the top of your game.”

Now he’s settling into his role, Shears feels at home at 45 Park Lane. “Working within a hotel offers you more
scope to collaborate with the wider hotel teams, and the support system is much stronger. “For me, being part of the Dorchester Collection is a great honour and the company really values its employees.” 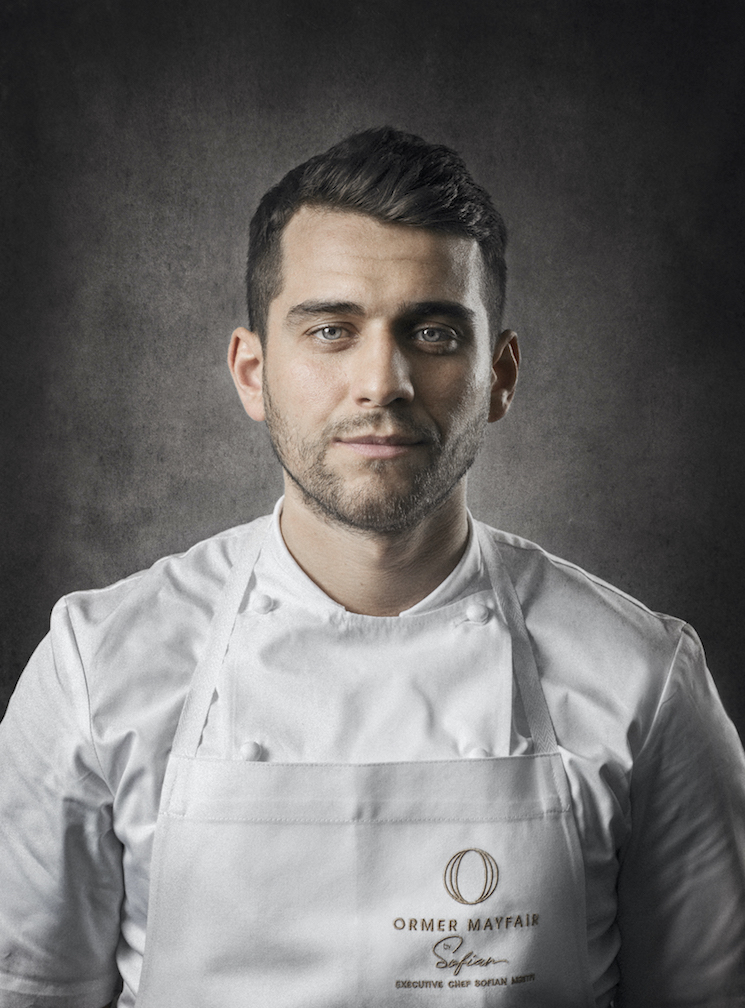 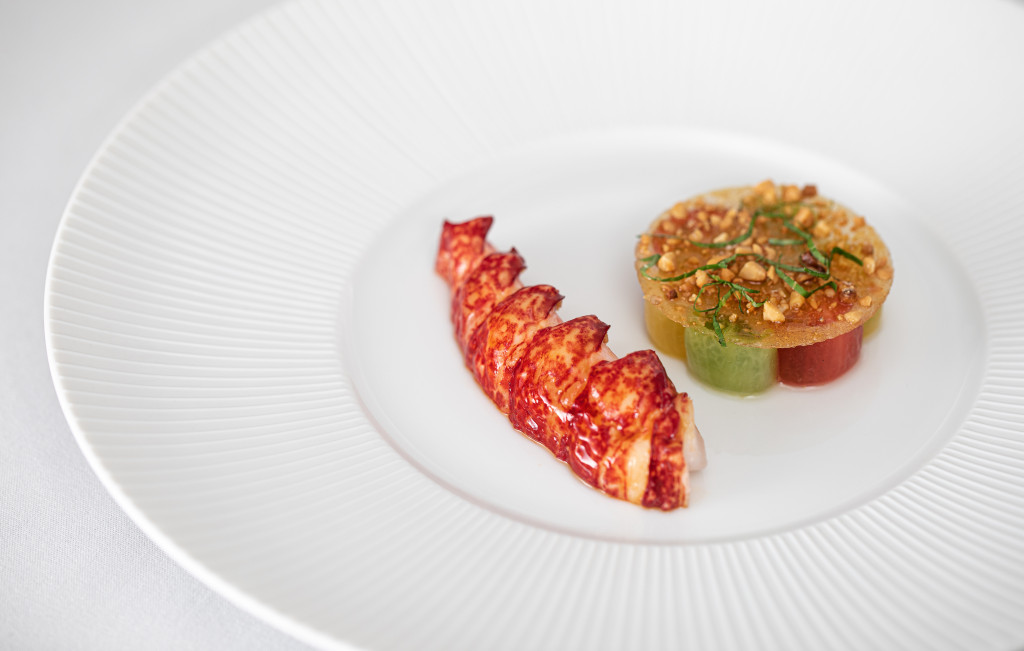 While food was a “big deal” in his family home
– his Moroccan dad was a chef in London and
they would enjoy tagines around the dining
table – Sofian entered the industry by accident.
Having left school early (“wasn’t a fan and it
wasn’t for me”), he got a job as a kitchen porter
aged 15. “I started washing up and then after six
months I was prepping veg and learning about the
industry.”

He enjoyed the camaraderie and discipline and would go on to work in two Michelin-star restaurants, The Hand & Flowers (Tom Kerridge), Midsummer House (Daniel Clifford), and five-star Irish hotel, Adare Manor. “In my younger years, being told that I was not going to amount to anything was probably a bit of fire in my belly,” he says. Still only 29, his new restaurant at Flemings Mayfair has his name above the door and is a fine-dining experience with a choice of three tasting menus (five, seven or nine courses).

“We use the best British produce and don’t mess around with anything too much,” he says. “White plates, two or three flavour profiles.” Dishes include the likes of warm Iberico ham with Parmesan custard and Bramley apple and poached native lobster with Isle of Wight tomatoes (the dish he is proudest of). Out of the kitchen, he is disciplined too; four litres of water a day, no coffee (he gave it up during lockdown) and can often be found in the gym after service.

“That can be midnight or one in the morning. It’s a proper switch-off.” His main ethos for Ormer was to make sure his brigade of eight had a “nice working environment”. “It’s important,” he says. “Happy
chefs are good chefs.” 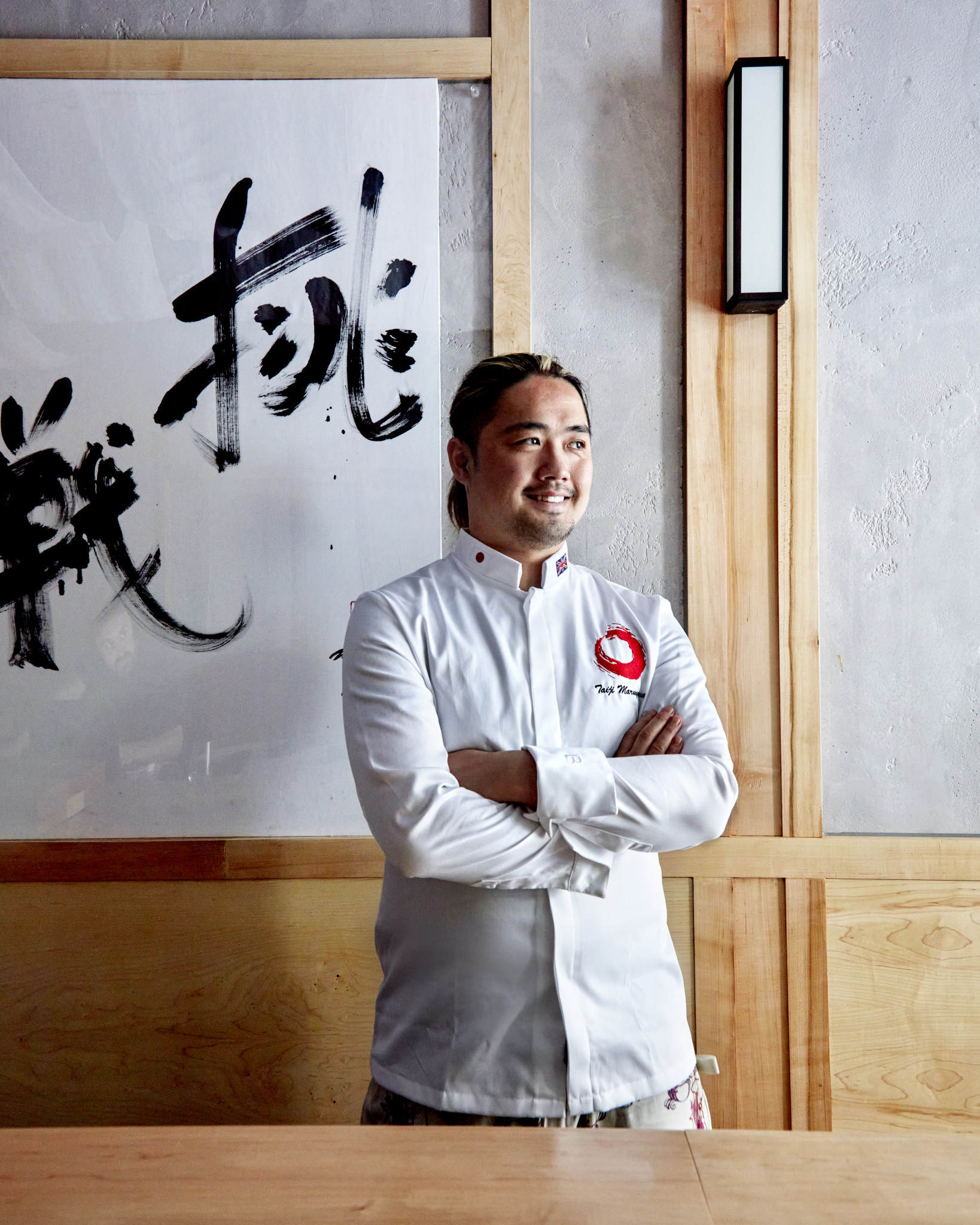 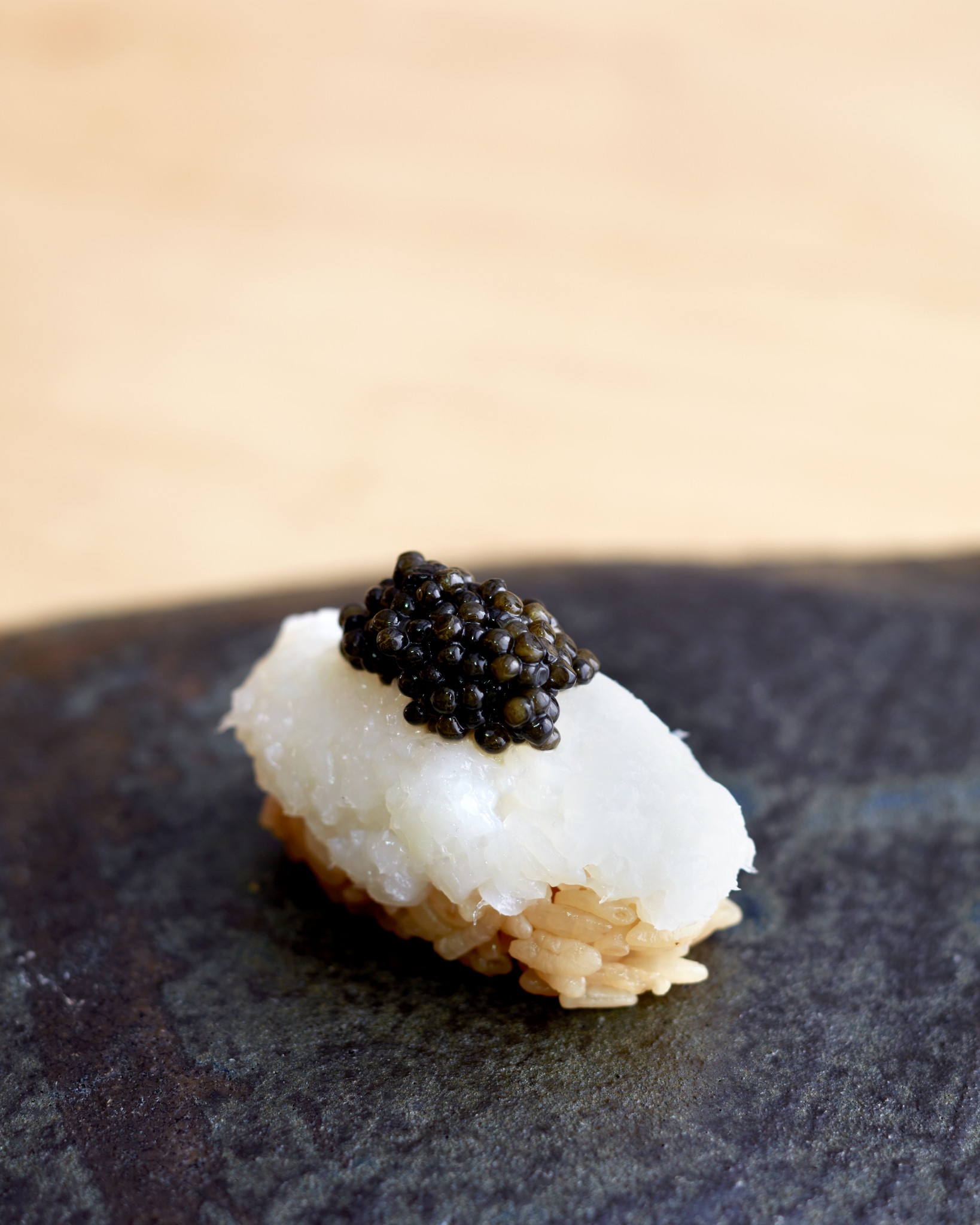 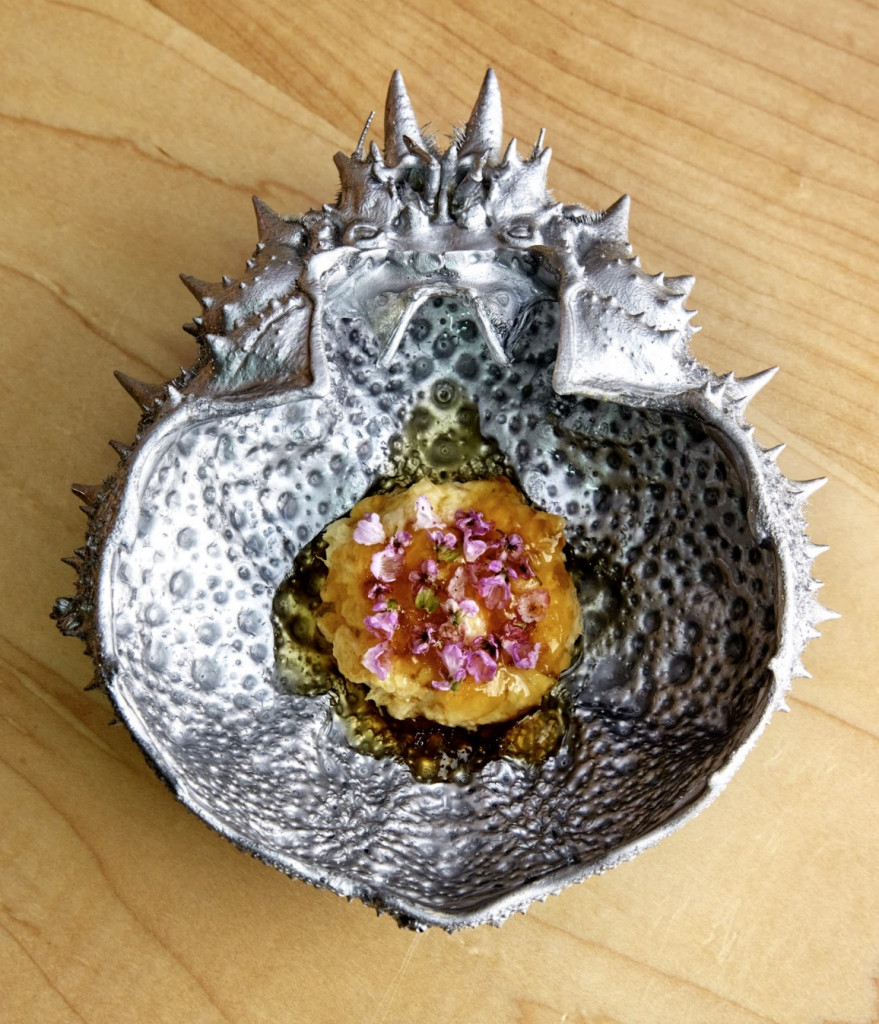 Taiji Maruyama was born to be a chef. The third generation in a line of sushi experts, he grew up in his family restaurant until he was 18 years old.

“Our home was on the floor above the restaurant itself, so my passion for cooking has come really naturally.” The new Japanese restaurant to get Mayfair foodies’ lips moving, MARU, sees Maruyama create a dining experience led by a sense of omotenashi – translated as ‘wholeheartedly looking after your guest’. “The omotenashi mindset is incredibly important to me. I aim to welcome guests from my heart and always look to connect with my guests in any way possible – and I think these personal touches are the best way to do it.”

Maruyama is talking about the way he makes much
of the crockery used to present courses; his own
personal interior design touches; and even arranging
the flowers. “Omotenashi at MARU is more than a simple act of service; it’s a way of life and a deep-
rooted culture, with a focus on the spirit of harmony between guest and host.”

Diners – there are just eight covers at each service –follow an omakase-style, daily-changing tasting menu comprising 20 courses. “I think it’s important in that it allows diners to have a comprehensive experience that is almost like a story. We ensure
that it flows smoothly like a river, and yet has ups
and downs like a mountain to really emphasise the
journey.”

Dishes themselves are informed by sustainability
and seasonality – also showcasing specialist
Japanese cooking techniques. “Our ethos at MARU is
based around the idea that all ingredients wherever
possible will be sourced sustainably and seasonally
from within the British Isles.

“My favourite British ingredients have to be fish from Cornwall, and vegetables from NamaYasai Farm, which is in Lewes.”

Depending on the day, you might taste the likes of
Brixham squid nigiri with Exmoor caviar; Cornish
spider crab; or locally-caught tuna, dry-aged for eight days in house (MARU is the first Japanese
restaurant in the UK to specialise in this technique).
“By purchasing locally-grown foods, we can help
maintain farmland and green open space in our
community; and through using local suppliers and
raising their profile, they are then able to work
towards locally-grown produce becoming the norm.
“The personal relationship I have with my
suppliers is key – it’s pivotal that we work together to
create the best possible experience.”

Maruyama says that Mayfair’s appetite for Japanese food continues to grow and diners are more learned about Japanese cuisine than ever before.

“In Mayfair, people really like Japanese food anyway
– but you also have guests who have been to Japan
and bring their experience home, which also helps
us grow. Knowledge of Japanese food is increasing
every year. Mayfair is the right place for MARU.” 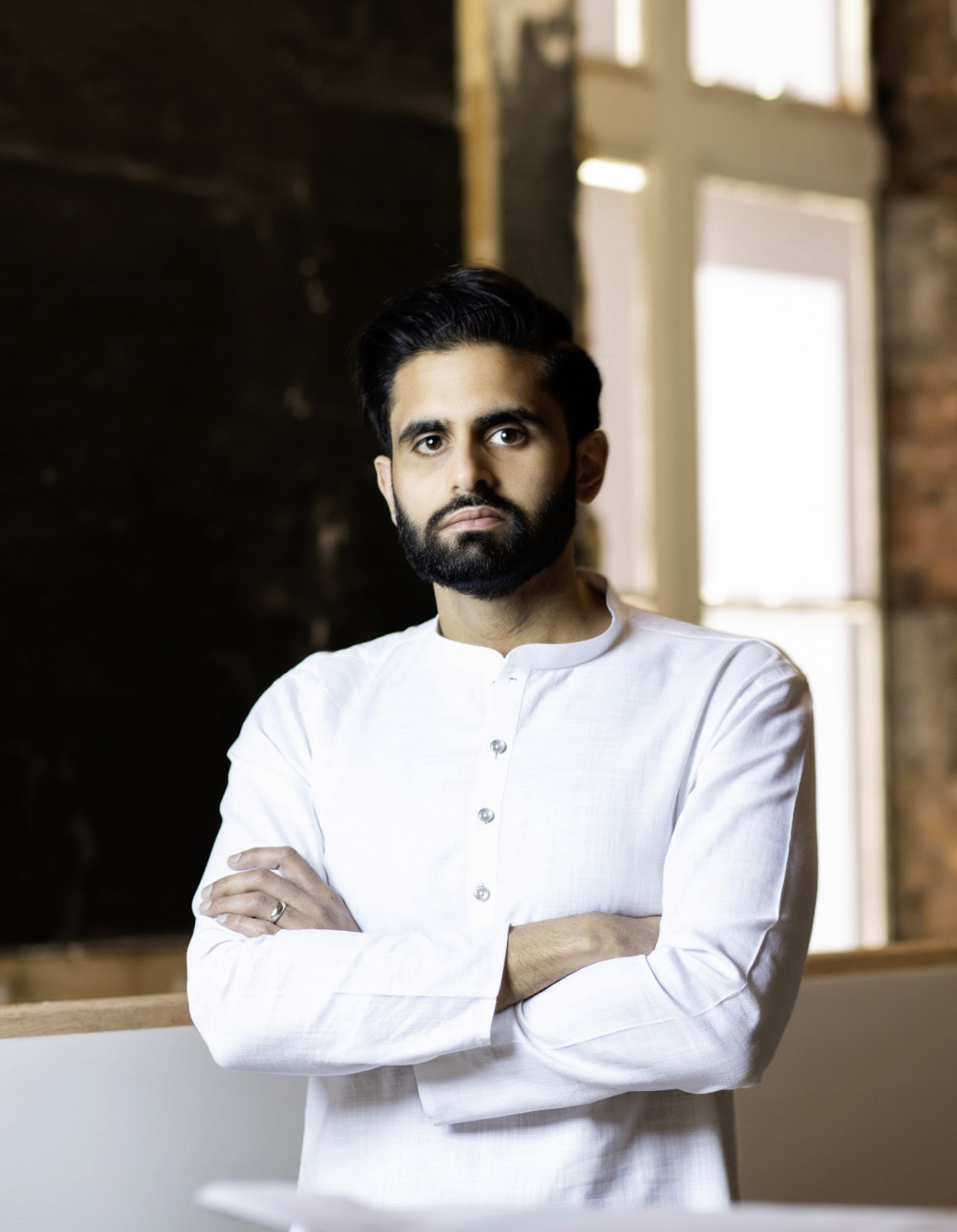 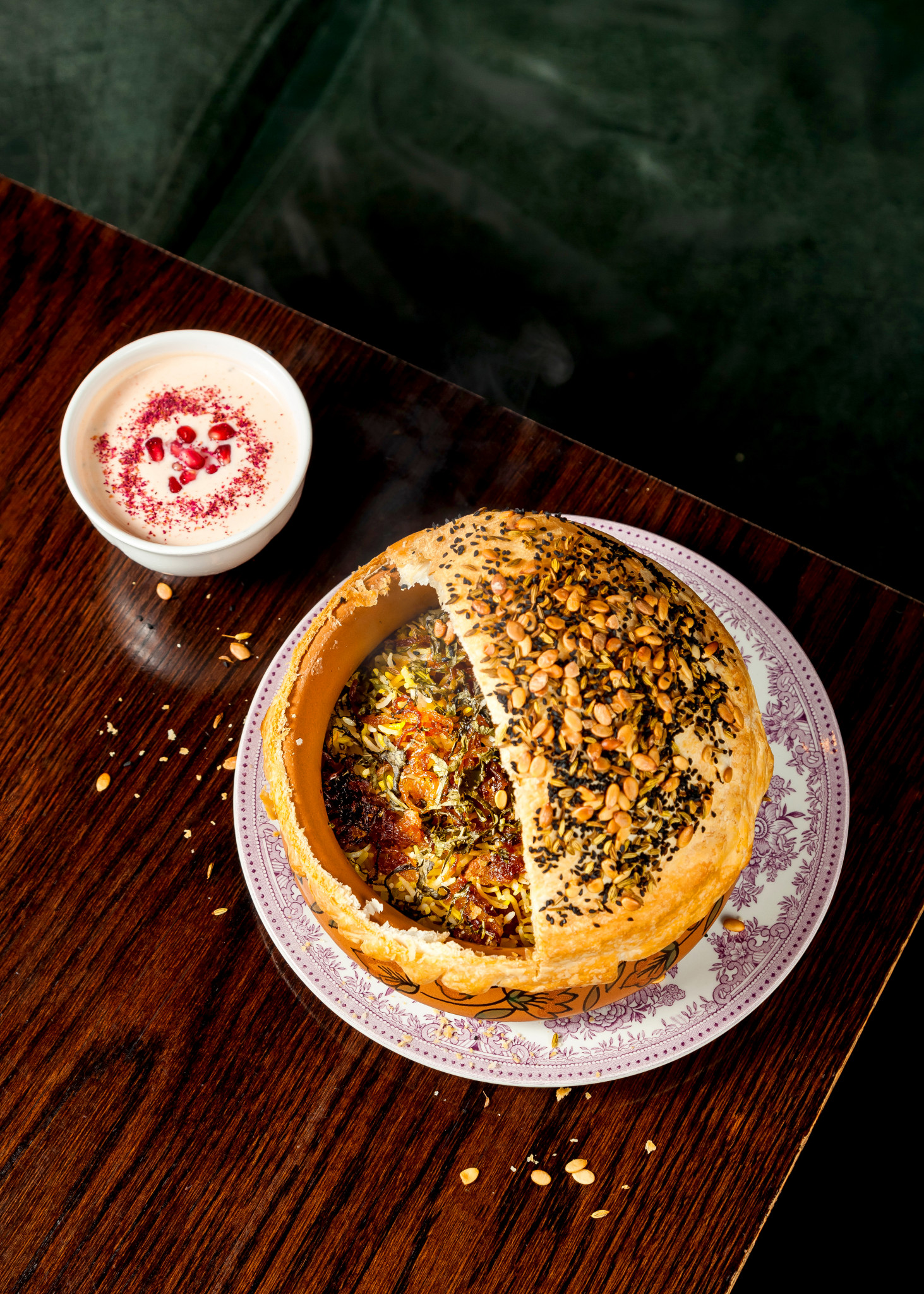 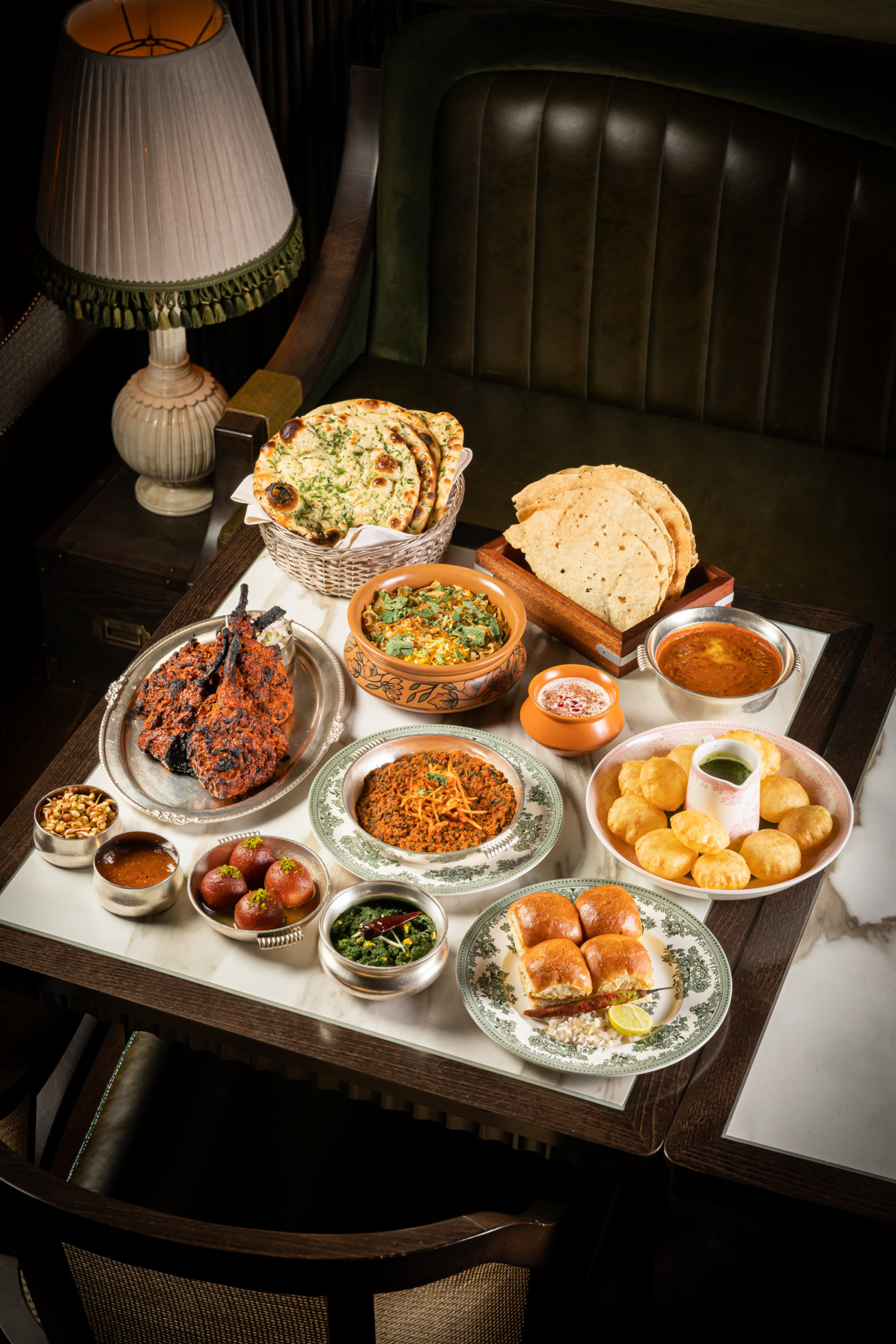 Chet Sharma has been a key part of JKS restaurant
group’s success over the past four years. As group
development chef, he helped articulate the food
offering across the group’s sites, which include
Gymkhana, Trishna and Hoppers. Now, he is opening
his own place under the JKS banner: Bibi, which is
located on North Audley Street.

“It was while we were working on the idea of taking
Gymkhana international that Karam [Sethi, one of
the siblings behind JKS] said to me, ‘You’ve got some
really interesting ideas that don’t really fit with any
of the Indian brands or anything we’re doing at the
moment from a development capacity – have you
thought about your own place’?”

Sharma presented a business plan and the ball
started to roll. “Four years later and I’ve officially
moved over to partner status.”

Bibi will dive into a variety of Indian culinary traditions – but guests should expect the unexpected.
“We don’t want to present an Indian dish in an Indian format,” says Sharma, who concedes his own grandmother would “probably question what half
of the things on the plate were”. “We want to tell a
story of Indian food and Indian flavour profiles but
presented in a different way.”

Bibi will honour the diversity in the countless cuisines found across the subcontinent. “We’re always talking about India as this one place; but India has at least three defined seasons wherever you
are. Not having a specific regional tie-in means we
can be more responsive to what you want to eat.”
Sharma says that due to Partition, his family has moved throughout India – from what is now Pakistan, to Haryana, the mountainous regions further east and Bombay – as well as Kenya, where his father’s family have lived for over a century. His grandfather was a bank manager, who travelled throughout India opening branches, picking up techniques and ideas for dishes along the way. These are experiences Sharma credits with his interest in the diverse tastes of India.

“It’s a bit cliché to say it, but with Punjabi families,
everything is centred around the table. We grew up
with a variety of food, and that’s where my interest
in non-Punjabi food came from. It wasn’t until I went
to university and was hanging out with other Punjabi
people that I found this wasn’t a normal experience.”

Sharma’s cooking has historically been “fine-dining heavy” – consulting for the likes of Simon Rogan’s L’Enclume, The Ledbury and Moor Hall; but
Bibi is set to be a more relaxed affair. “If you want
caviar and truffles and things like that, absolutely.
But if you want to have drinks and snacks at the
counter, by all means come in. We don’t want to be
prescriptive in the way people enjoy the restaurant.”
He is still very much hands-on when it comes to
cooking. “I like getting stuck in and being with the
team in the kitchen,” he says. “Over the next few
years I’ll be glued to the pass at Bibi.” Mayfair was the logical choice when it came to selecting the perfect place for the restaurant.

“Mayfair is food positive; what you can do here in
terms of refinement on the food wouldn’t necessarily
work in places like Soho or East London. It lets us
really lean into the luxury factor. When we talk about
wanting to recreate that really cosy feeling of your
grandmother’s dining table [‘Bibi’ comes from an
affectionate name for your grandmother], there’s
no other place than Mayfair,” says Sharma. “The
richness, the textures, the softness of the leather
we’re using in the restaurant; Mayfair is the perfect
place to do that.” Bibi will open at 42 North Audley Street