Secrets of a Hollywood Star

A Hollywood star since the 1950s and a Belgravia resident for the past 30 years, Dame Joan Collins isn’t about to put her feet up. In an exclusive interview, the evergreen actress and her daughter, Tara, talk fame, motherhood and the uncensored diaries that promise to pull no punches 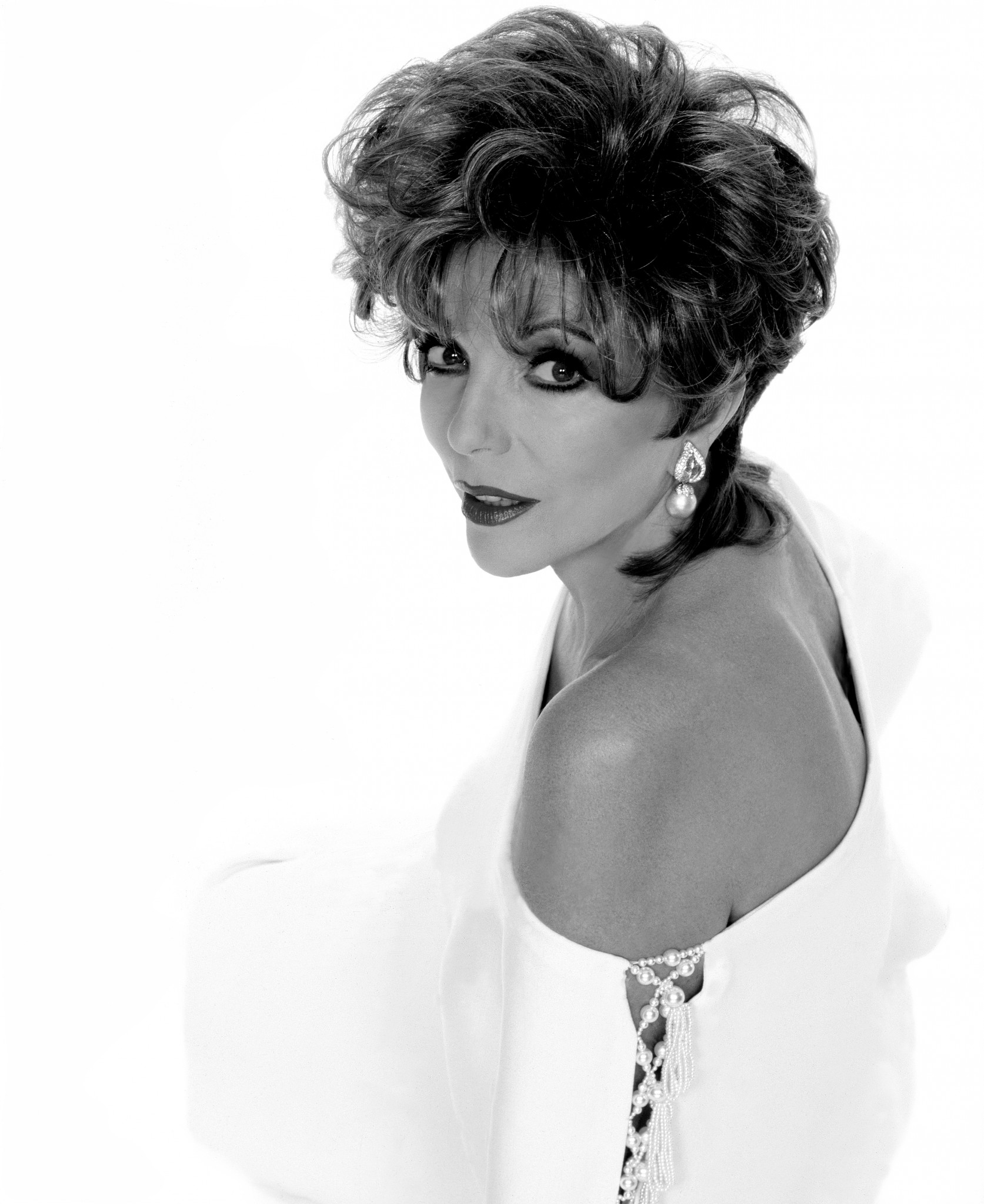 Even amid a national lockdown, you can always count on Hollywood royalty, Dame Joan Collins, to keep herself occupied.

It’s a Sunday and at chez Collins, it’s all go; her granddaughter has called in for a brief visit and she is busy preparing for a trip to America.

Covid-19 has meant she and fifth husband Percy Gibson, 56, have been living in her Belgravia apartment for just over a year — normally the world-famous actress, who has starred alongside everyone from Bob Hope to Bette Davis, would be jet-setting to somewhere equally fabulous.

“It’s been the same as everybody else — boring! — but I’ve managed to do enough to keep myself physically and mentally well,” the 87-year-old tells Belgravia magazine. One such activity was compiling The Uncensored & Unapologetic Diaries of Joan Collins, due for release this October. Billed as “often outrageous”, with many encounters with celebrities and members of the royal family written within 10 hours of events taking place, publishers have described them “as scandalous as Andy Warhol’s”.

“I’ve been writing diaries since I was 11-years-old,” Joan says. “I don’t write them all the time, I write them when I feel like it and during this particular time — it was after Dynasty had finished — and I’d come home at night and I’d speak into a recorder about what had been going on during the day.”

“I kept all these tapes, and I’d go through them, they went from 1989 until about 2005. I put them all away and then a friend of mine said ‘why don’t you bring them out, diaries are very popular now’.”

“I thought ‘what a good idea’, then they read it, made an offer, and so it’s coming out.” Is there anything she had to take out? “Well of course!” she says. “It’s not the most intimate of diaries. It’s very social and it’s very work-oriented, and very funny, I think.”

A sense of humour must run in the family; Joan’s daughter, Tara Newley, 57, is a writer, having just penned her debut novel Radio Honey — the story of feisty DJ Cassandra Bates, inspired by her real-life experience as a presenter at an all-female radio station.
“I wrote Radio Honey nearly 20 years ago, and when I couldn’t get it published, put it on a shelf and got on with other projects, all based around my love of writing,” Tara says. “I think it is important to keep doing what you love doing even if at first you don’t succeed.”

Joan, perhaps best known for playing the delicious villainess role of Alexis Carrington Colby in hit 80s’ soap Dynasty, acknowledges the pair share some of the same characteristics: “She’s very indomitable, she’s able to multitask, I think she’s able to be a very good mother and work at the same time. She doesn’t quite have the same zest for life that I have, she doesn’t really like travelling, going to new places, whereas I do — she’s more zen — she’s more of an activist in the mind.”

Tara, who is mother to Miel, 21, and Weston, 16, cites being a single mum as her reason for being able to write,and write quickly. She writes under the name Arkle, having married fellow writer Nick Gilador Arkle (she divorced Miel’s father, the French composer, Michael Adam, in 2002).

“If I had a spare hour or two I would damn well sit down and get on with it!” says Tara, who credits her famous mother as her inspiration. “She has given me drive, chutzpah and strength to pursue my dreams and passions no matter the long and winding road, and a sense that women have the right to be strong and independent. Feminism is not a dirty word, nor should it ever be!” 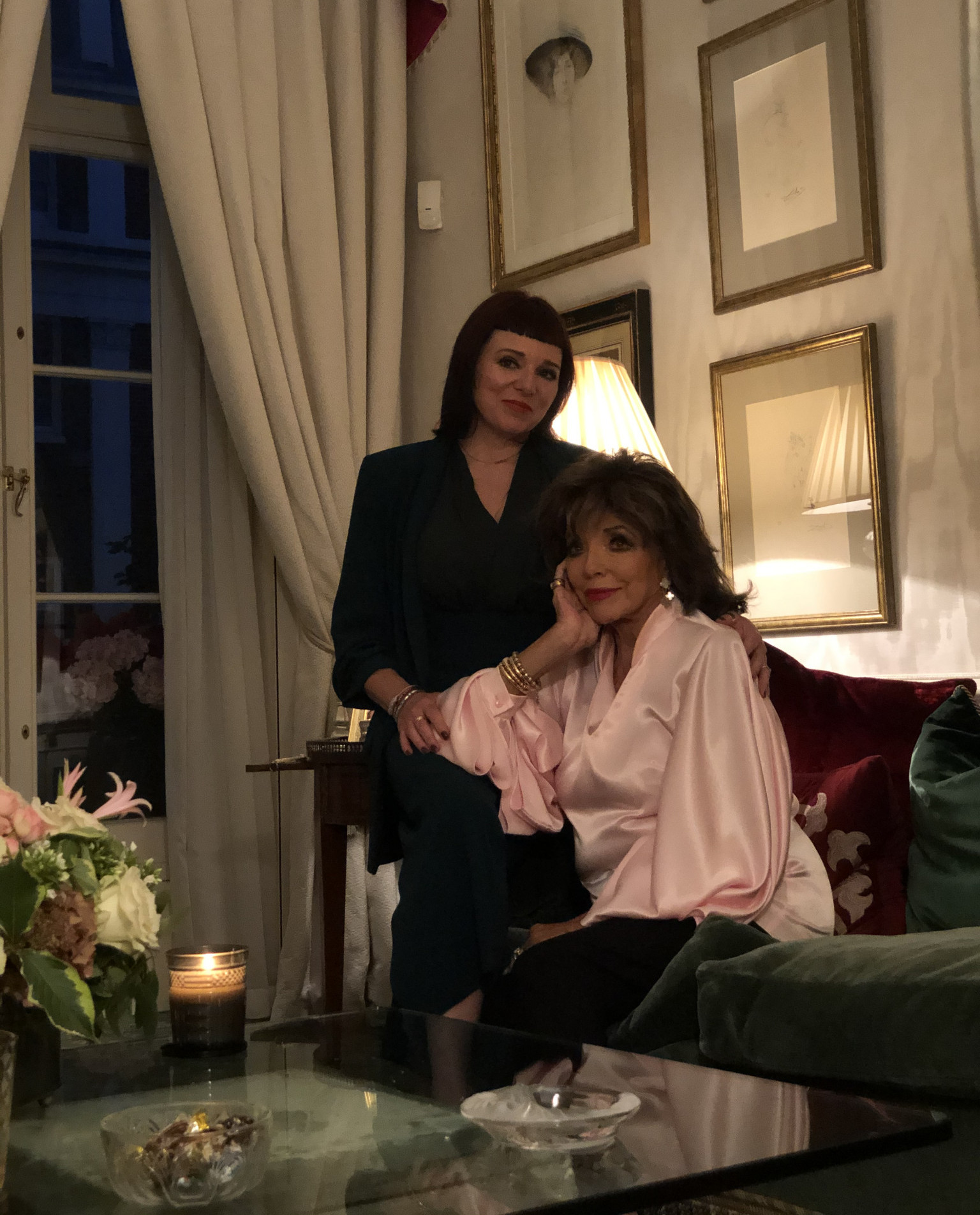 If anyone understands the predicament of being a working single mother, it’s no-nonsense Joan, who divorced their father, the singer-songwriter Anthony Newley, in 1971.

“It’s very difficult, particularly in the business that I was in,” says Joan. “You have no set hours. I worked in films since I was 17 and I gave up my career when I had my children — Tara and Sacha — for about eight or nine years.

“Then after my divorce I was the number one breadwinner so I had to work and that meant filming because that was my job, and that meant getting up at five, and that meant having to get carers or nannies to look after the children because mummy was at the studio and we didn’t know whether it was going to be 15 hours a day or 10 hours a day or even a day off, which is always good. Of course you didn’t work all the time, but you would get a carer or a nanny for all the time you worked. 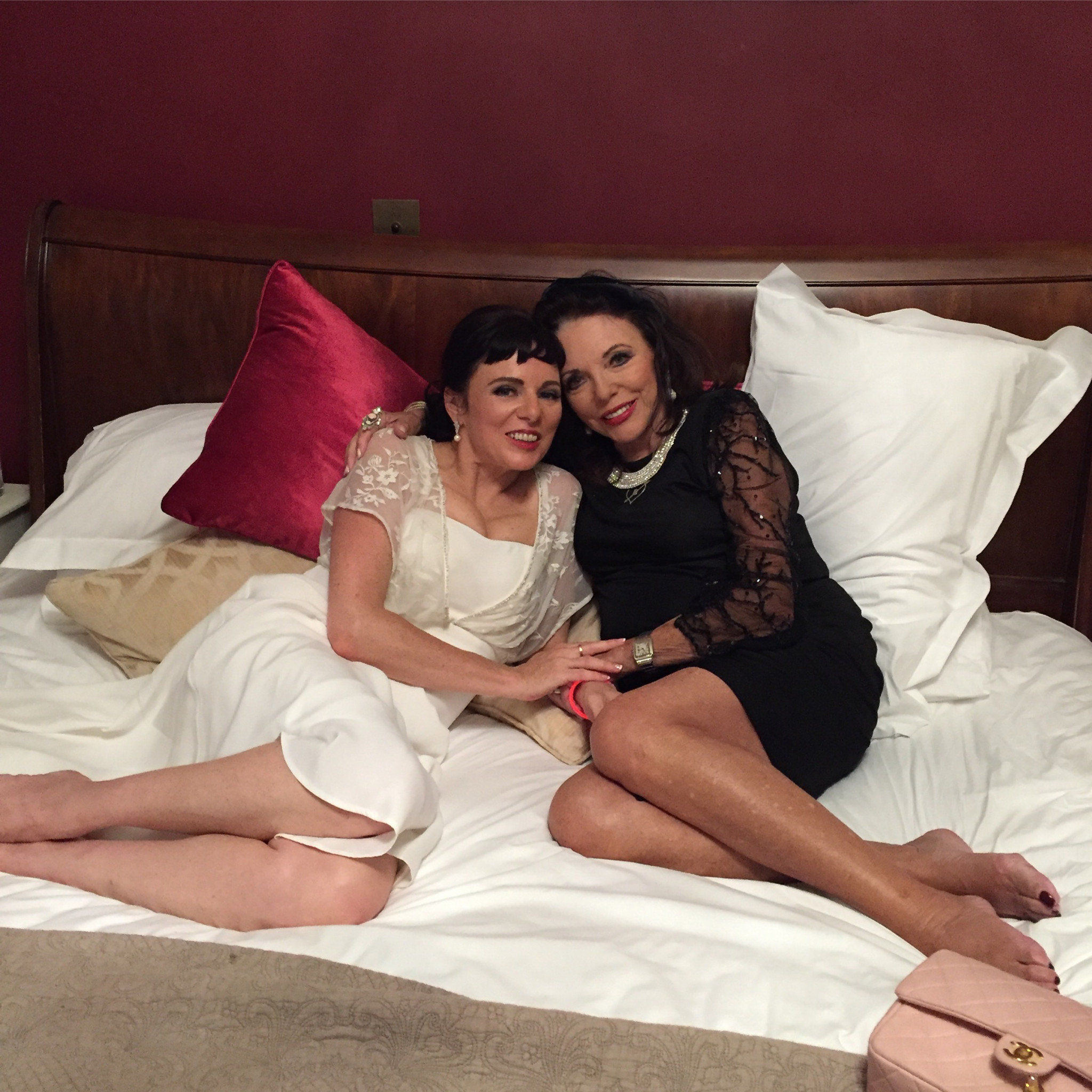 We had very nice nannies but I think I did spend a lot of time with my children. I was with my son Sacha yesterday — that’s probably not allowed — but anyway I was and we were going through family albums and trips that we had with different people and talking about how much fun we used to have in Marbella on our holiday.

“I took a house in Marbella because I had so many children at one point — I had three children of my own and three step children — all under 12 — and we would have them in all the holidays and so it was difficult keeping that many children entertained in London.”

Tara is Joan’s eldest child and a respected writer and broadcaster, says that being born into a well-known family was both “challenging and rewarding.” “Surrounded by so much talent, you have to find what makes you happy rather than compete with such stellar entities.

“I never considered going into showbiz in any serious way, but have had a few run-ins with comedy acting — I am a huge fan of comedy!” she reveals.

“I can’t remember a particular moment when I saw my life as different from other kids from the point of view of my parents, but as a writer I think you often feel like an outsider as you are in your head most of the time, and have a very internalised view of the world.”

Joan, a former pupil at Francis Holland School, made her stage debut aged nine and this year marks 70 years as a working actress. “It doesn’t seem like it,” she says. “I do like working, although I haven’t worked much in the last year. I have a lifestyle that I’ve become used to and I need to keep that up — I’m not about to downsize.”

The RADA-trained actress recently celebrated 19 years of happy marriage to Percy – the pair met in San Francisco in 2000 and married at Claridge’s two years later – and they have homes in Saint-Tropez, LA, and New York. But she also knows all too well about not having a home; as a war baby, she was evacuated many times, and went to 13 different schools from the age of five. “I was quite resilient — I would have to adjust to each one and then come back to London,” she says.

We’re running out of time; Joan’s granddaughter has arrived —  they haven’t seen each for six months —  and there is the small matter of packing for LA. Two weeks after we speak, a picture on Instagram shows a bejewelled Joan, sporting dark sunglasses and ruby red lipstick, reclining at the powder pink Beverly Hills hotel for a photoshoot. It’s business, or showbusiness, as usual and what’s more, this Dame is as in-demand as ever.

“I’ve been here for 30 years and I love it. I didn’t necessarily say I wanted to live in Belgravia, but it was because I found the flat that I fell in love with it and I was looking around this area. It’s peaceful, its quiet and I love Belgravia [Square] Gardens – we spend a lot of time there over the summer. It’s been wonderful – I’ve been able to go for walks in the area during the pandemic. I love Elizabeth Street and Santini [in Ebury Street] and, of course San Lorenzo [Beauchamp Place].”

The Uncensored & Unapologetic Diaries of Joan Collins, published by Weidenfeld & Nicolson, this October. Radio Honey by Tara Arkle, published by Black Pawn Press, is out now