Billionaire John Caudwell gives us a rare glimpse into his world – his rise to become one of Britain’s most successful businessmen, his Mayfair mega-mansion and his charity 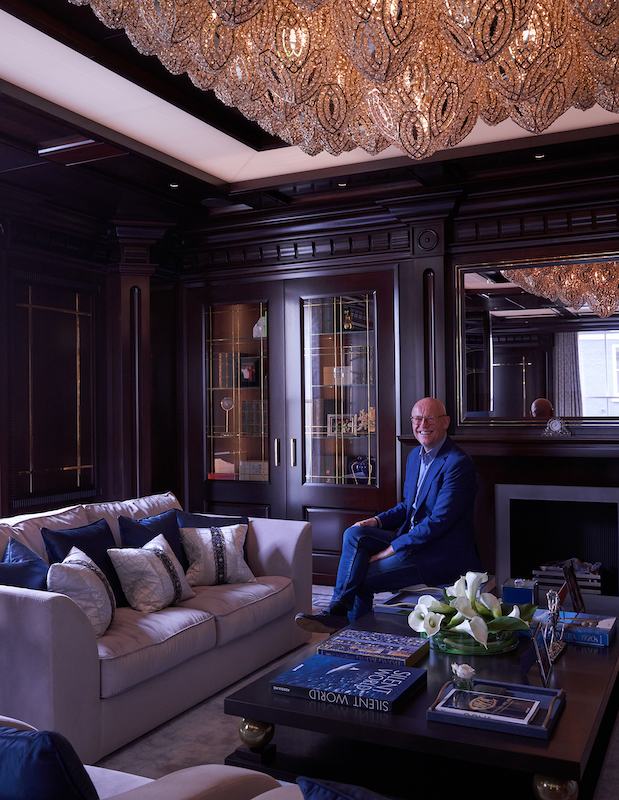 Billionaire John Caudwell is straight to the point when asked if he ever has to pinch himself as we sit in the £250 million luxury Mayfair mansion he calls home today. The 43,000 sq ft property is, after all, a far cry from his childhood terraced house in Stoke-On-Trent, or the years he lived frugally in a caravan as he struggled to find his way in life.

“No, I don’t pinch myself. Never,” the 67-year old laughs loudly, and adds: “That makes me sound ungracious but it’s not. As a five-year old I worked like mad to make money, selling in my backyard and I have done that all my life. So to get to where I am today has very much been an evolution, not a revolution for me. And it is a constant work in progress.”

Caudwell made his billions as the founder of Phones4U, the colourful chain of mobile phone stores from the 1990s and early 2000s. At its peak, Phones4U was reportedly selling more than 20 phones every minute, and boasted some 8,000 employees.

He initially invested in 26 mobile phones from Motorola in the late 1980s, and spent the next year selling them. His journey to success was tough, however, and he admits: “When I started in 1987, I lost money every month for two years.”

However, having decided (correctly as it turned out) that mobile phones were the future, he persevered in building the business. After almost 20 years, he sold the firm in 2006 for around £1.25 billion.

Though he has invested in several properties across the UK since his rise to success, including a mansion in his hometown of Stoke-on-Trent, over the past decade he has also invested in two prominent Mayfair sites.

One is what Caudwell describes as a “hideous” former car park that will be redeveloped into super prime luxury apartments on South Audley Street. He acquired the site in 2012 and, after several years in the planning stage, a three-year build phase is finally set to begin this year.

“My brief to my architects on [the South Audley Street] site was ‘grand Mayfair architecture’ and my aim is to quite simply build the most magnificent residence in the world,” says Caudwell, who adds that, whilst he is not interested in building another “typically” Mayfair property, the aim is to develop a luxury residence that fits comfortably with the area around it. New York-based architects Robert AM Stern Architects (RAMSA) is leading the design.

“The quality of what we are doing is immensely desirable. It is why we have delayed our project for so many years; we bought the site eight or nine years ago but we have taken our time to design the most beautiful formula and ensure we build something that is not just aesthetically pleasing but is unique and breaks the boundaries of traditional Mayfair architecture. We have definitely put beauty and functionality before speed. I can’t wait to knock that unsightly car park down and build something that is worthy of the space. When it is finished, I expect it will be one of the most expensive addresses in the world.”

Of course, this is something Caudwell does know about; his current abode is also Britain’s most expensive home. The subject of a recent Channel 4 documentary, Caudwell let a team of cameras into his home as the final £68 million worth of renovations, that took some four years, came to an end.

Renamed Mayfair House on completion, the mansion is formed from two listed homes that are linked together by a basement. The property boasts eight floors, 15 bedrooms, five kitchens, a nightclub, cinema, spa and pool and Thai-themed dining room with a river flowing through it.

It also has a complex underground car stacker system, with room for eight cars. The highlight of the property is its elegant ballroom, one of the only private residences in London to boast one. Having spent four long years renovating both the interior and exterior of the property, Caudwell says it is, without a doubt, his favourite place to be when in London.

“I’d never actually lived in Mayfair before,” he explains. “And it always seemed a little bit scruffy to me, a little too commercialised. This was 10 years ago. But as I was spending more and more time in London because of my charity, I needed a bigger place to entertain so that I could continue to meet with wealthy people who supported my charity.”

Caudwell’s search for a property went on for five years, extending from Mayfair to Kensington, Knightsbridge and Belgravia. “The more time I spent in London and got to know it, the more I realised that Mayfair was in fact its epicentre. If I ever wanted to go to a restaurant it would be in Mayfair. I don’t go to nightclubs but if I wanted to it would be in Mayfair. It had the best shops, lovely classic antique shops. And I came to realise that Mayfair was the future.”

He negotiated on the property for over a year, following which the renovation of the property has been a humongous task, and Caudwell has been involved at every stage.

However, whilst his status as a billionaire has enabled him to invest in such properties in Mayfair, it is his charity work that predominantly drives him today. He is a renowned philanthropist, and he formed Caudwell Children over 20 years ago. He remains the charity’s largest single benefactor as well as personally paying the charity’s annual administration and management overheads to ensure all funds raised go directly to children who need it the most. He has vowed to give away at least half of his wealth away during his lifetime and after his death.

“My passion today is not business or property, or making money – it is all about charity. Money is often seen as a measure of success but anything I work on today has to have a feel-good factor for me as well.

“People often say to me, ‘You are the man that has built the amazing house in Mayfair’ – but to me that doesn’t mean anything. Anyone can be wealthy and own material things. And I feel lucky that I am able to do so. But I feel luckier to be able to do charity work – that is a complete luxury.”