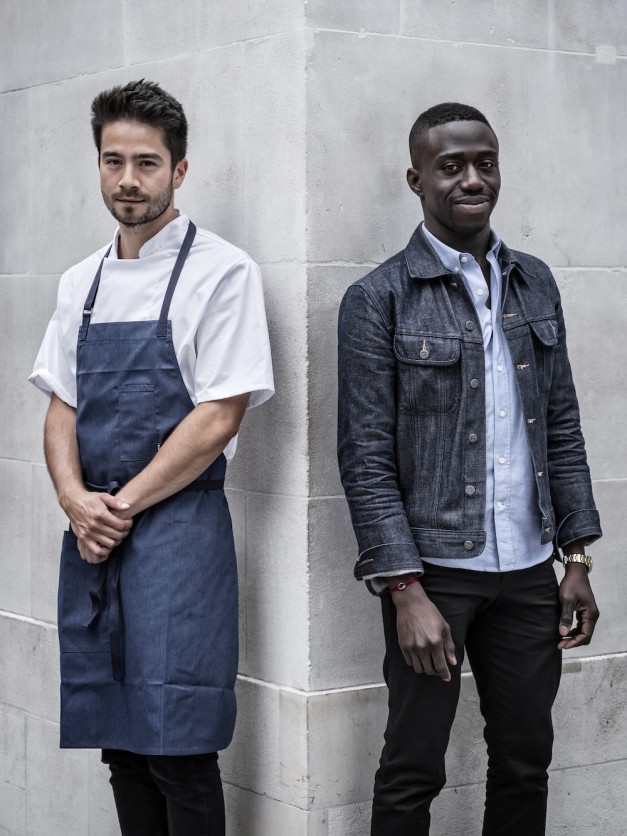 With their restaurant Ikoyi in St James’ Market, founders Iré Hassan-Odukale and Jeremy Chan are bringing the taste of West Africa to London. We chat to the team about their inspirations, their favourite dishes, and little-known ingredients.

How did the idea for Ikoyi come about?

H-O: I wanted to open a restaurant; and at the time, Jeremy was working at Dinner by Heston Blumenthal, but was looking to leave. We decided to work together in 2015, and it’s grown from then to what it’s become now. We started by trying to find a space and getting ourselves out there.

What was it about this sort of cuisine that attracted you?

C: Iré said that he was looking to do a Nigerian style restaurant, and he was talking to some people about it. We’ve been friends for a long time, and he asked me if I would help him consult on a menu. Initially it wasn’t planned to be what it has become. It was more of a side project – a fun project to look into Nigerian ingredients; but once we started looking into it, we realised that Nigeria and many other countries in that region have a whole diversity and wealth of products that have not been analysed and cooked in a gastronomic concept.

We did a lot of research at the British Library; we did a lot of recipe testing; we did a lot of pop-ups and private dinners just testing these ingredients. We just became passionate about discovery and applying technique and real critical thinking to ingredients that have never really been used before, like they are at Ikoyi. We wanted to create a restaurant that’s never been made before.

We’re not trying to recreate a traditional Nigerian restaurant, or a typical West African restaurant; we’re just doing our restaurant, which is our perspective on these ingredients. 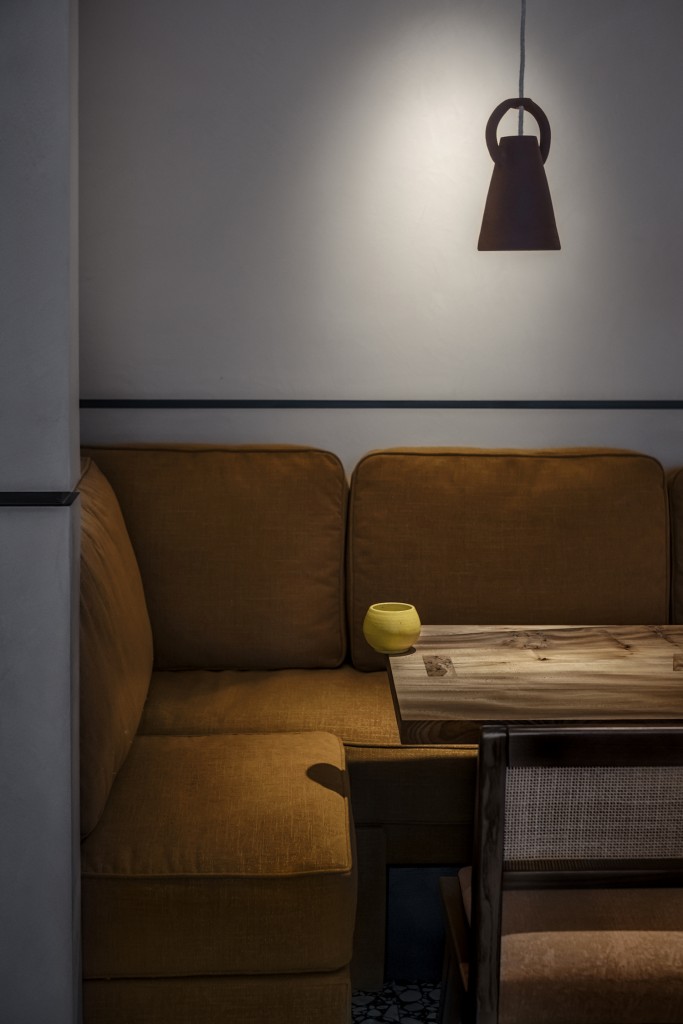 Why has West African cuisine been so underrepresented in London – particularly with high-end restaurants?

C: I think it’s ignorance, for one thing. West African ingredients are immediately available: spices, products, suppliers. And there are huge, huge communities in London consuming these products. Every kitchen in the world uses black pepper; but why don’t they use the hundreds and hundreds of varieties of black peppers that come from these different countries that are far more aromatic, pungent and complex than what chefs are normally using? These ingredients have the same level of potency as cinnamon, star anise or clove, but because they’ve never been used before by a respected chef or kitchen, they’ve never really been taken on and used in the masses.

H-O: There are West African restaurants in London, but they target West Africans and they are mainly in the suburbs, because they make their living off the diaspora. They don’t have to be accessible, or try and attract Londoners, because they have enough business.

C: But to be clear, we aren’t cooking ‘West African cuisine’. We’re just cooking cuisine which takes influence from our experiences in many different kinds of restaurants. We’re applying our thinking to these ingredients, from a completely objective standpoint. There’s no-one saying, ‘let’s try and recreate this goat stew that is a specialty of Northern Nigeria.’ We might do that, but we’ll fill it with many other different kinds of twists and perspectives as well. We just don’t want people to get the wrong impression.

When people come, they should come with an open mind – because most of the things they are going to try they may never have tasted before. Some of the dishes take inspiration from other cuisines, technically. There are some dishes that have only a flavour reference to West Africa, but much more reference to Japanese in terms of technique. For instance, we make a broth using a lot of dried fish and kombu, and we also infuse that same broth with lots of West African peppercorns, specifically: Gola peppercorns from Sierra Leone. Someone from that region will pick up on that flavour, but they might not necessarily understand why the dish is the way it is. We just wanted to create delicious food using these kinds of products.

What sort of dishes can diners expect, and which ones are you most excited about?

H-O: I think for me, it’s the Suya blade of beef. That has probably been there since the beginning. I think people are going to love it because no-one else does steak like that – or cooks beef in that way, with those flavours.

C: The majority of diners in a city like London will want a piece of beef on the menu. So the idea was to create the best piece of beef we could imagine, out of these tools and ingredients. It’s not a big piece of meat – we don’t serve you a 300 or 400 gram steak – it’s a little bit leaner and a little bit more pared back. But it’s very slow cooked, so it’s very rich and the flavours are intense. The way we prepare it is that we marinate it in a roasted, fermented crayfish powder, which is high in umami; smoked peanuts and many different types of spices. So it leaves a lingering sensation in your mouth for quite a long time after you’ve eaten it. We use the blade cut of beef from the shoulder and we slow cook it – then finishing it on the barbecue.

What about drinks – are you looking to specific regions?

C: We’ve got very specific cocktails that have been designed to pair with a lot of the ingredients from the menu. We’ve worked with cocktail specialists from a bar in East London called Three Sheets. They’ve developed menus for some of the best cocktail bars around London.

We do a really delicious martini with okra vermouth. We cook the okra into the vermouth which lends it some viscosity; it’s only a small part of vermouth to gin, which is infused with grains of paradise, which are really fragrant peppercorns from Nigeria. The overall result is that it has some hold to it; it’s very, very round in texture; and you get that really green taste, but also a very fresh, fragrant drink. That’s kind of our approach. There is a lot of thought and preparation that goes into the drinks, but they’re very simple in terms of presentation. They’re not tall, fancy cocktails – they’re very minimal and clean, but full of flavour and very specific in terms of the flavour they’re targeting.

What about the design?

H-O: We worked with interior design and creative direction studio, Studio Ashby. We picked different people that we liked and whose work we liked. Owen Wall, who does our bowls and plates, has been working with us from the beginning. Jeremy approached him in the early days, when we were doing our pop-ups, and he was excited about doing something from this part of the world.

C: Every single detail you see in the restaurant has been pored over; every plate, every design, every surface. It all feeds into our overarching aesthetic direction, which is ‘less is more’. We’re not trying to overstate this idea of West Africanness. We’re just subtly hinting, and implicitly demonstrating those qualities through textures and colours that we find inspiring – but were not targeting any specific aesthetic goal relating to West Africa. It’s very much inspired by that area in terms of colour and texture, but it is abstract.

The approach that feeds through every aspect of the design is to fill it with a lot of substance, but pare everything back; not putting too much on the plate, not putting too many objects on the walls, keeping the logo simple but distinctive, keeping any lines and any writing or graphics as clean and direct as possible. On the one hand, it makes it look easy; but there’s actually more room for error, particularly with the plating of the dishes, where there are only two or three things on the plate. They look very simple, but they actually require a lot of thought in how they should be presented.

Why was St James’s, and the St James’s Market development specifically, the right location for Ikoyi?

H-O: When we started, our mentor said that there was this new development which has a few restaurant spaces. At that time, we were looking at central London because we wanted it to be accessible to Londoners; we wanted anyone from London to be able to try the food. So we went for it – it was the first offer on any place that we made. But they said no – understandably, because we weren’t ready. I don’t think we knew that at the time. I think if we had opened then, we’d have probably been in trouble.

Around 15 offers and rejections later, we approached them again – at the end of last year – for a different unit. It turned out that the space we originally applied for was still available, so we cooked for them and they offered it to us. But we wouldn’t say that we specifically chose – it wasn’t our really our decision.

C: We really fought to the death to get a space. We were really at the end of our tether in terms of finding a site; and we were super fortunate that The Crown Estate decided to offer it to us. But yeah, it was by no means us acquiring it from them. We had to work for it!

H-O: Oh yeah. They’re very particular about who they let in. We’re just glad they did, because I think we’re a bit of a wildcard.

C: We’re super grateful that they have let us open at St James’s Market, because they’ve given us the opportunity of a lifetime. Now that we’re in the space, we couldn’t imagine the restaurant working anywhere else. It just works here. The process of getting it, the analysis – and the fact that they put us through our paces – we’re really grateful for that as well, because it made us stronger and it made us really think about what we were doing, and really analyse our numbers and our market and whether this concept would really work. 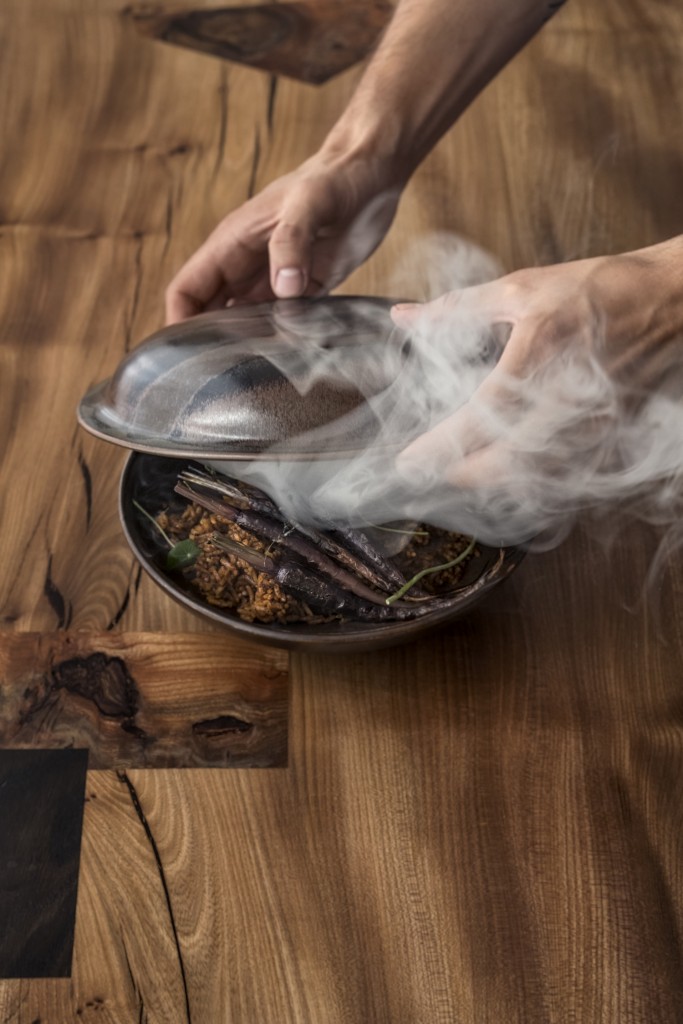 What’s next for you guys? Are there any more restaurants in the works?

C: We want to smash this one first. We have to make sure that our service, our front of house and the food execution is the absolute best it can be. We want to lead that field in terms of new cooking and looking at new products. We want to continue to investigate. In terms of other restaurants, I think we’ve got some ideas in the pipeline – but I think we have enough on our plate at the moment!