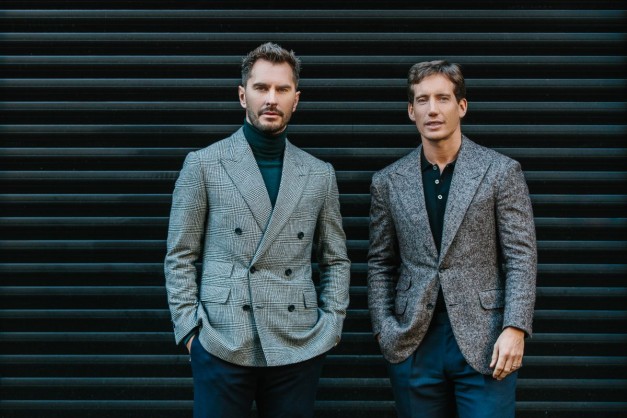 Tailors Thom Whiddett and Luke Sweeney have taken menswear by storm. We find out why they’re the perfect fit

In Thom Sweeney’s clubby workshop, beautifully-besuited blokes wield oversized scissors and lengths of material in the pocket-sized space, as I sit across from Thom Whiddett and Luke Sweeney – founders of the contemporary tailoring house. While everything seems in check – unrolled tape measures, off-cuts of fabric and spools of thread dotting the broad tabletops – Thom Sweeney represents a shift in the narrative of bespoke tailoring in London.

For over a century, the most renowned tailors in London – and indeed, the world – have centred on Savile Row. While there is still a significant concentration of tailors on the Row, there are a number of younger tailors that are paving their own way – leaning less on Savile Row’s reputation in favour of other exclusive streets. Thom Sweeney, with its bespoke site on North Mayfair’s Weighhouse Street, is leading the way.

First setting up shop in a miniscule Mayfair space, Whiddett and Sweeney took private orders from clients they had built relationships with while Whiddett was head cutter at respected tailor Timothy Everest, and Sweeney was heading up the brand’s made to measure arm. Soon, Thom Sweeney had opened its first workshop proper on Weighhouse Street, garnering attention for its understated, contemporary cuts. 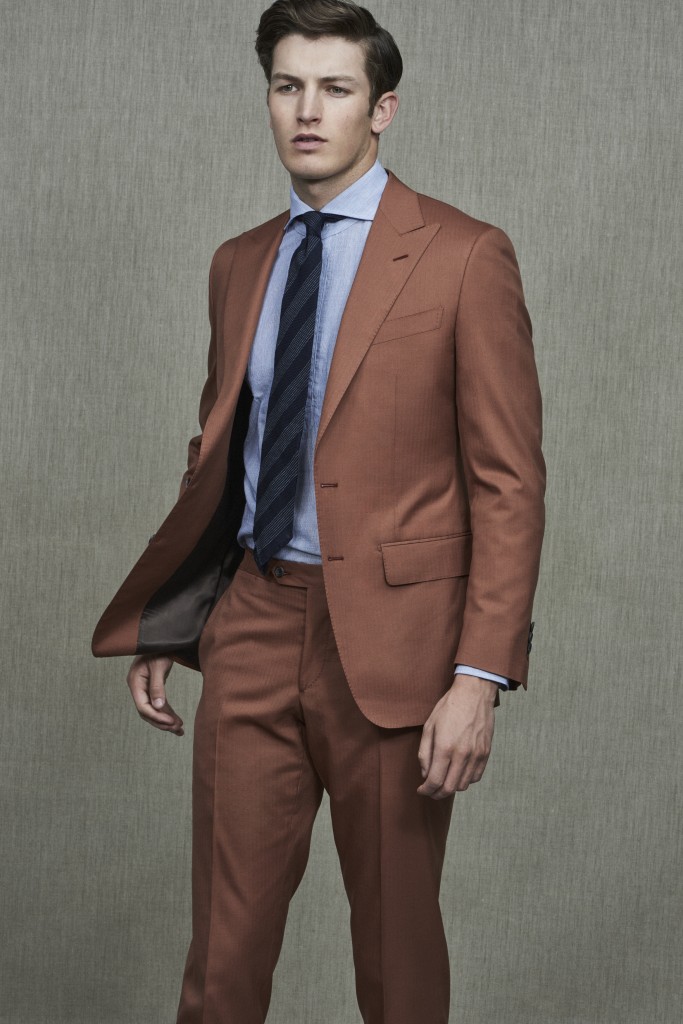 “We wanted to be in Mayfair, there was no question – that was the one area we wanted to be. But I think one of the things Tim showed us was that you don’t have to be on Savile Row,” explains Whiddett. “You can present it in a different way. We didn’t have this set-in-stone idea of being a ‘classic’ tailoring house.” Indeed, for Whiddett and Sweeney, the perception of being on Savile Row, while standing for something, would potentially have been paralysing to what would become a youthful, dynamic tailoring house for the 21st century. “If you’ve worked on Savile Row all your life, you might not have the confidence to then do something off the Row. It wasn’t even a thought. We just knew that we would be okay wherever we were – as long as we weren’t two hours out of London, we knew customers would come.”

By the time Thom Sweeney was ready to launch, Whiddett and Sweeney had already decided that Savile Row wasn’t for them. “We didn’t want it to be stiff and formal,” says Whiddett. Despite not being the right location for Thom Sweeney, they feel that Savile Row still has importance in London’s sartorial landscape – even if they have recognised the potential in other areas. “You talk to anyone internationally, and Savile Row is still considered the mecca. It stands for something in British tailoring, and always will,” believes Sweeney.

“I don’t think it’s as important as it was in the 60s, 70s, 80s and 90s – there are lots more options now. But it definitely has a presence, no doubt about it.” Whiddett agrees. “I think that younger guys research into it a bit more – they’re into where it’s made, what your look is, your aesthetic – they get an idea about the quality. You don’t have to be on Savile Row for them to feel confident in coming to you.”

Thom Sweeney is sure to instil confidence in prospective suit buyers. Its house cut – broadly described as timeless with a modern sensibility – appeals to a wide-ranging demographic. By not slavishly following trends, it has built a dedicated following of style-savvy gents that require modern styles without en vogue embellishments. “In our industry, it’s very dangerous to be ‘in fashion’. You can take snippets from fashion, but you can’t get too embedded in it,” explains Sweeney.

“Ultimately, when guys are investing in handmade clothes, they want it to last and wear well for a long period of time. We’re lucky in that our general cut hasn’t really changed that much, but it still looks very modern,” says Sweeney, noting that the sharp, expertly crafted suit he is wearing was made in 2012.

It’s not just the bespoke side of the business that is offering timeless pieces to customers. In 2013, Thom Sweeney launched its first ready to wear collection with online retailer, Mr Porter. The two-season exclusive was followed by the 2014 opening of the brand’s first ready to wear store, discreetly tucked away on Bruton Place. Whiddett and Sweeney saw ready to wear as a natural step forward for their thriving tailoring business. “Bespoke is a very funny business; once you get to a certain point, you know what you’re going to be doing next year – because there’s only so many jackets and trousers you can make, and there’s only so many people you can see throughout the day,” says Sweeney. 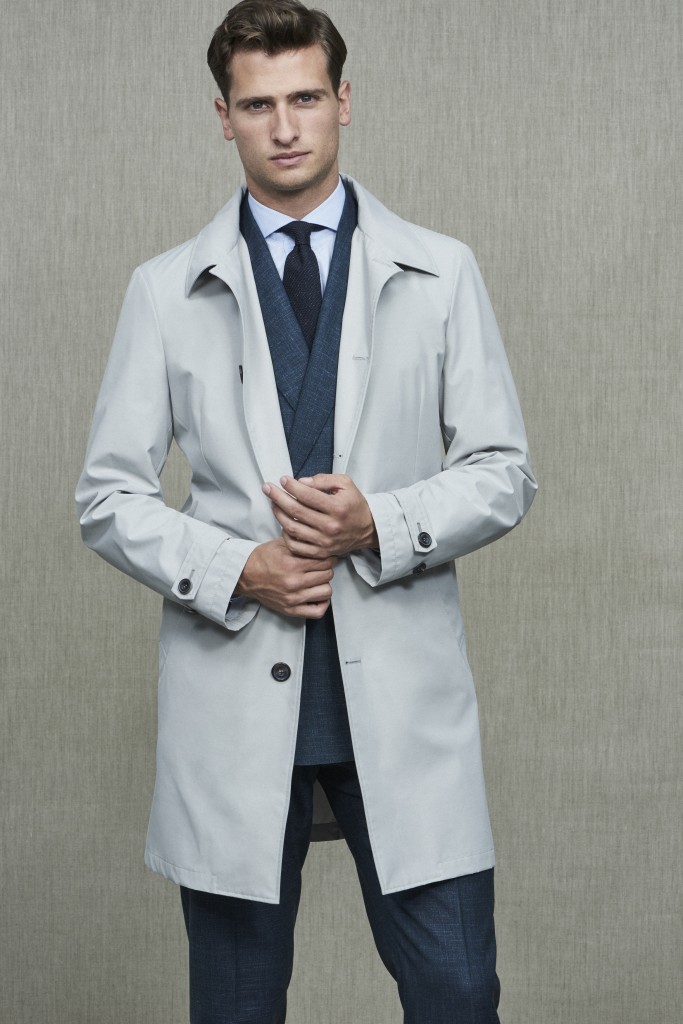 “We’re still young guys and we’re fairly ambitious, and so we’re always looking to grow the business. Before we launched ready to wear, we did a few collaborations and that was a way of adding to the business – so when it came to doing ready to wear, it felt like an organic progression.”

The tailors say that Thom Sweeney’s ready to wear collections are just another way in which they can help style-conscious men look good, without the formality and process of bespoke. “Nowadays, guys don’t always want to wear a suit – definitely not seven, or even five days a week,” says Whiddett. “We wanted to look after our guys properly.” They tell me that even though customers can now buy garments straight off the hanger, the emphasis is still very much on creating timeless pieces that are built to last. “We want pieces that someone’s going to keep, and in five years time, they’ll still pull it out of the wardrobe,” says Whiddett. “That’s value for money.”

This acceptance of ready to wear, and the potential Whiddett and Sweeney see in this sector, is one of the ways that Thom Sweeney differs from Mayfair’s more traditional tailors. But there are other, less tangible factors that mean that the brand is reaching out to a younger demographic. I suggest that Thom Sweeney’s younger team gives the tailor a head start in connecting with a more youthful audience. “The fact that online is so strong now, and the way people are hearing about things, means that we’re going through the biggest change in retail and tailoring in a long time,” thinks Whiddett. “Even the big fashion brands are having to rethink how they’re set up. For us, we’re quite small and still young, so we can adapt easier.”

Sweeney and Whiddett aim to keep the brand dynamic by bringing young makers into the Thom Sweeney team. “We’re trying to create our own workshop here – to get more control, to get more younger guys training in the industry. All our coatmakers and trouser makers are in their 20s.” says Sweeney. When he and Whiddett were first starting out, “there was a void of youngsters” in the business, and the older Greek and Italian coat makers from the 80s and 90s were retiring – meaning that the bespoke industry was struggling to produce garments on home soil. Now, he says, there is increased interest in the industry from the younger generation – something the pair have recognised and are looking to take advantage of. “It’s really important to keep fresh blood coming in,” says Whiddett. “The older we get, the less in touch we probably get with everything, so it’s great to have young blood around. We did an initiative with guys from Newham College; now we do London College of Fashion as well. We always have people doing apprenticeships, and we try and keep on the best ones.”

Thom Sweeney is clearly building for the future; so what’s next on the cutting table for the tailoring twosome? “We’ve got a long goal – an end game,” says Sweeney. “I think you can be disappointed with things like five-year plans. You can make bad decisions, and in the current economic climate, your plans have to change. You have to go with the flow a little bit.” He says that this year’s big move is to open a standalone ready to wear store in New York. “We look at doing something every year. In 2016, the main investment was to set up our e-commerce; before that, it was Bruton Place. There’s always something happening.” Whiddett believes this restrained ambition is what keeps the brand fresh. “Otherwise, you feel it getting a bit stale…”

Long term, Whiddett and Sweeney see the business growing significantly – but are dedicated to retaining the principles that have seen the brand consistently gain supporters since coming onto the scene. “Not diluting the brand – that’s really important to us. Maybe our grandkids will screw it up one day! But as long as we’re around, I think the focus is simple: making great clothes for gentlemen that appreciate fine clothing; making timeless classics with good customer service,” says Sweeney, as the bell above the workshop door chimes with the arrival of another customer.