Weak oil prices meant Nigeria slipped into recession in 2016, but Africa’s largest economy is returning to growth. The International Monetary Fund has predicted a 0.8 per cent uplift this year due to growth in agriculture, rise in oil output and big government spending. The impact of this recovery, and the wealth boom prior to this dip, is being felt across all luxury sectors, especially art.

“The market is pretty strong at the moment. Things in Nigeria were pretty terrible about a year ago, but the economy has largely stabilised, the problems they had with currency stabilised. The gap between the official rate for the naira and the black market rate has now closed (there used to be terrible problems getting foreign currency.) The government are being quite technocratic in the sense of getting on with things. Things have improved and that means that certainly for us, the more confidence there is in the art market,” Giles Peppiatt, head of Bonhams African department, gives an overview.

To prove his point, Bonhams set a new world record for any Nigerian sculpture in February, with a full-size cast of the bronze sculpture, Anyanwu, by Nigerian painter and sculptor Benedict Chukwukadibia Enwonwu, selling for £353,000 at the auction house’s Bond Street headquarters.

The sale was the culmination of the commemoration of Enwonwu’s birth 100 years ago, which included a dinner at Bonhams hosted by the chairman and founder of Coronation Capital Nigeria, Aigboje Aig-Imoukhuede and his wife, Ofovwe, and attended by the likes of Royal Academician Yinka Shonibare, the Tate’s Kerryn Greenberg and the Nigerian High Commissioner to the UK, Simon Ogah.

Enwonwu and fellow Lagos-born Yusuf Adebayo Cameron Grillo are regarded by many as the fathers of Nigerian modernism. Both are on Bonham’s list for the next Africa Now sale, which takes place in London on October 5. Grillo’s vibrant oil The Duet sold for £87,000 in February. Peppiatt highlights these two as experiencing the most astronomic rises, but with potential to reach higher.

“We’ve got a cracking sale, there are some amazing pieces,” assures Peppiatt. “We are now in our eighth year of having sales of West African art, and we have seen a huge growth. And actually a huge growth in people coming, the amount of collectors that want to be involved in art and catalogues and come to London for the event. It has changed beyond all recognition.”

“The world record for a Nigerian painting was one we sold two years ago for about £290,000 and for a sculpture it’s £350,000 – those prices would not even be conceivable five years ago.”

The buyers are Nigerians in Nigeria, London and around the world, many based in New York or Switzerland: “There are one or two non-Nigerian buyers who are in the market because they simply like the art work, or they think they’re a good investment and they’re under priced, but the biggest collectors are the Nigerians,” Peppiatt adds. 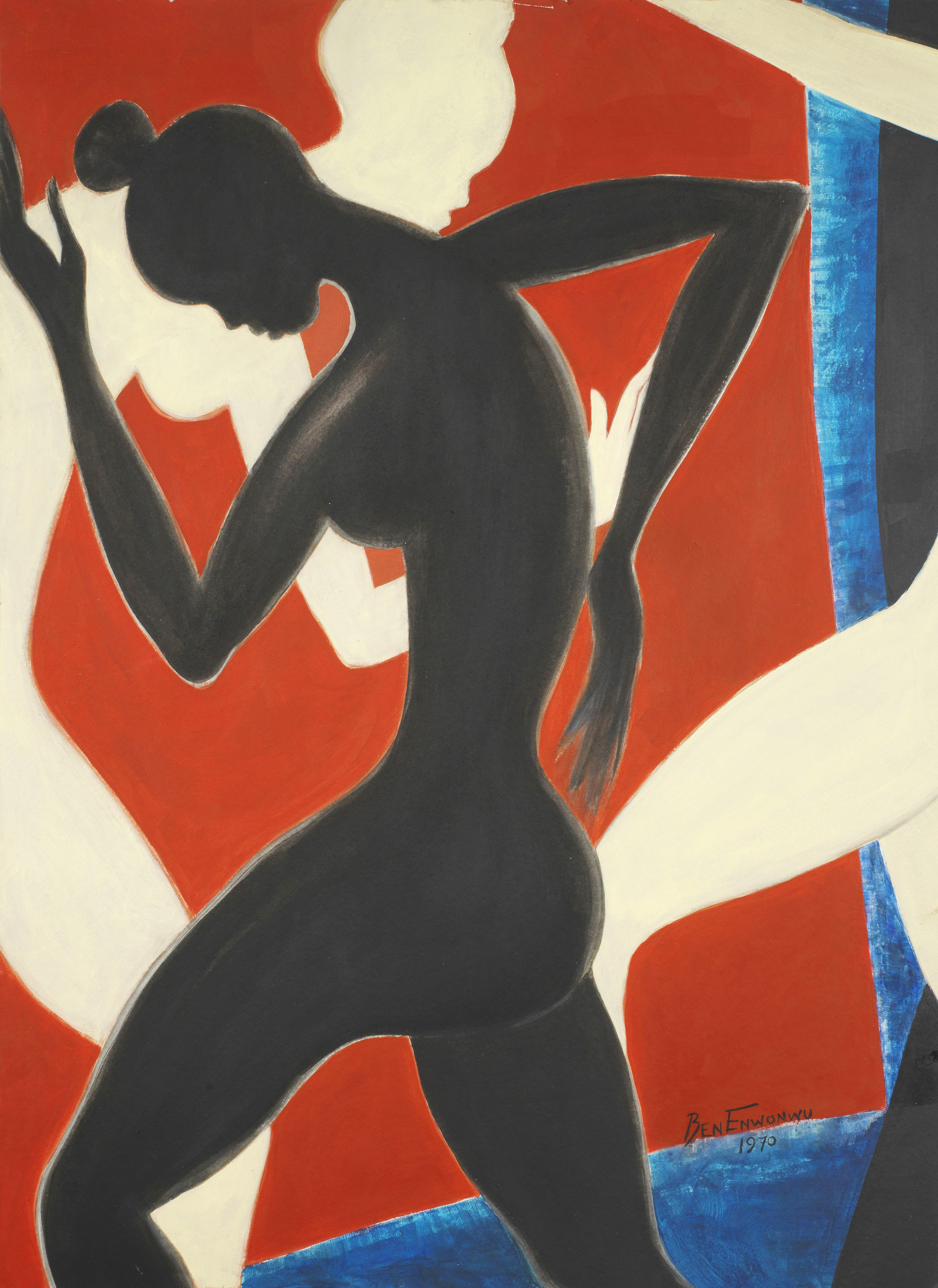 African-focused exhibitions here such as Saatchi’s Pangaea: new Art from Africa and Latin America, have been few and far between, but the tide is slowly turning – the fifth edition of 1.54, a contemporary African art fair, takes place at Somerset House in October. In Lagos, the scene is developing too, with more galleries, a new fair called Art X, and more auctions – all healthy news says Peppiatt.

“Art X went well. It’s great to have an art event of that kind in Lagos, it’s really important and gives the market more cohesion. They still have auctions in Lagos as well, an outfit called Art House Contemporary, they don’t have big sales, selling mainly up to £10,000 area but it’s great and I really want them to continue

because you really need to have a strong, vibrant local market in order for the overseas and offshore markets to remain viable.”

“We make sure we know what’s going on. We’ve got an office in Lagos which is incredibly busy. People take works to them asking us to value and sell them and also liaising and dealing with all the big collectors out there. You need to have someone out there, and to know all the right people.”

It’s because of this that Bonhams have dominated the African market, but now Sotheby’s are getting in on the act, although more on the contemporary side. The auction house has a new department focused on African art, led by ex-Bonhams specialist Hannah O’Leary.

“When Bonhams entered that market it was really at the very beginning of people taking notice of contemporary African art certainly here in London, there were certain economic factors at play that they recognised which meant that when I was there we started up those sales and they did very well. Sotheby’s is a company that does not go into new market lightly. They had certainly been watching both the sales at Bonhams and other sales of this category, there are other sales in Paris that specialise in contemporary African art and also obviously on the continent as well. All these areas have been growing enormously in the 10 years since Bonhams started those sales,” O’Leary explains.

“Sotheby’s saw a point where we could enter the market and help develop it even further, because obviously we’re a big company, a big brand in the art world and we have perhaps a wider reach than any of those smaller companies have. We saw an opportunity from where the market had grown to and where we could see the potential of the market going.”

The auction house’s first Modern and Contemporary African Art sale was in May, breaking 16 world records for African artists, including British Nigerian artist Yinka Shonibare (his Crash Willy sold for £224,750)

“One of the exciting things for us was to include artists who don’t have a natural home in another sale category,” says O’Leary. “It was a large reason for started these sales. By and large it was artists who have never been sold at Sotheby’s before, and almost half the sale were artists who had barely sold at auction anywhere before, so it was a real opportunity to highlight these artists who have reputations in other ways, so they might have strong primary market reputations, we know there are collectors looking for their work, or they’re also in major collections in museums, but because there hasn’t been a suitable platform for them at auction they may not have had the same secondary reputation that we would expect from artists of that stature.”

The biggest surprise of the auction was the range of buyers, according to O’Leary:

“Certainly this market is being largely driven by collectors from the continent, but actually we had a range of collectors from across the world, there were registrations from 29 different countries. Over a third were African collectors and private collectors. We had quite a few institutions bidding as well.”

On the artist side, O’Leary also mentions Ben Enownwu and Yusuf Grillo, but younger contemporary artists including Njideka Akunyili Crosby as well. “She is a young artist from Enugu, whose work speaks of her Ibo identity and heritage and is collected by museums worldwide, and has sold for $3million at auction” 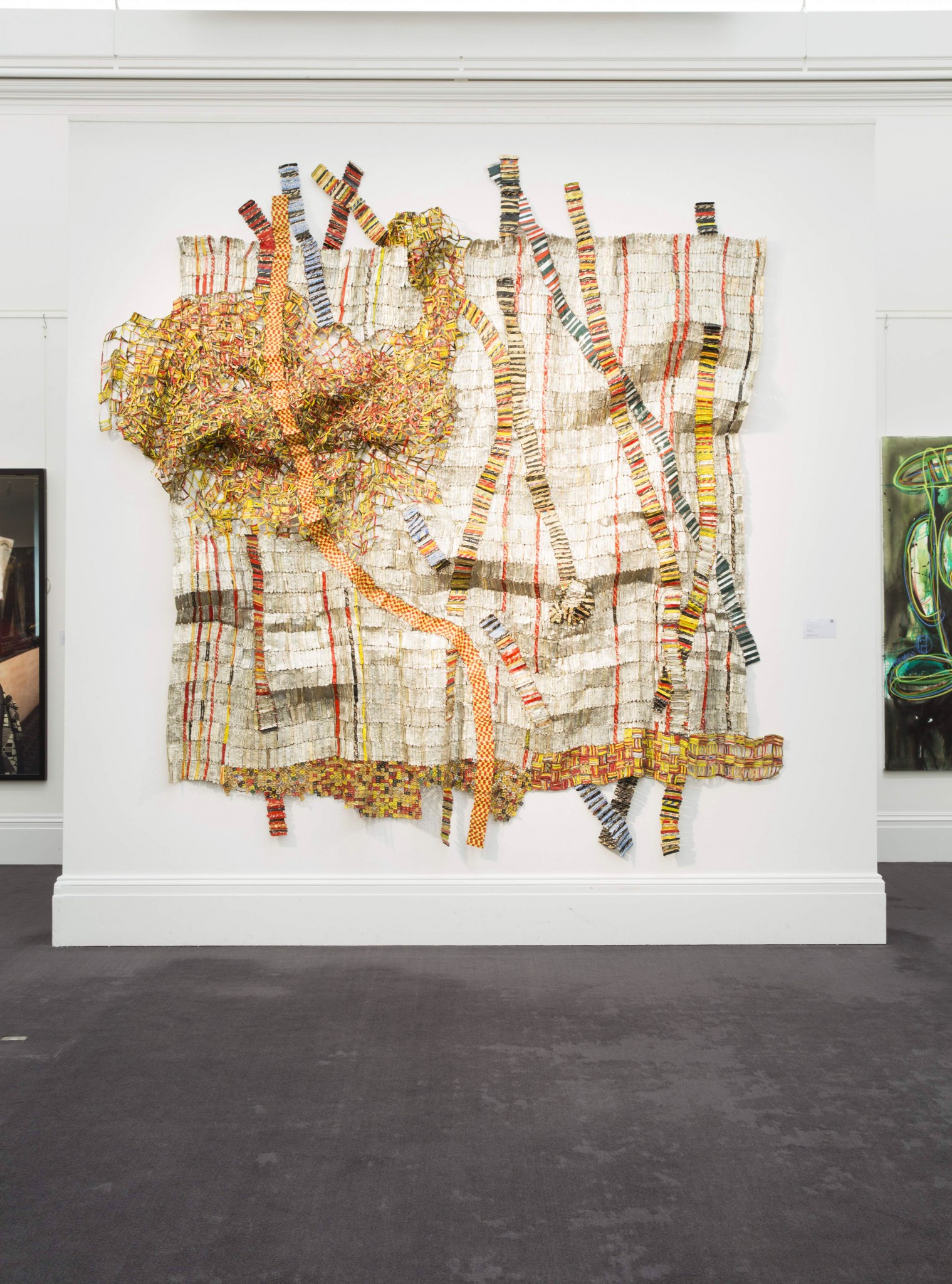 Others to watch include Peju Alatise – Sotheby’s sold her high Horses triptych for £31,250 in 2015 – and Victor Ehikhamenor, who are currently representing Nigeria at the first Nigerian pavilion at the Venice Biennale. Tyburn Gallery on Barrett Street is hosting a solo show on Ehikhamenor this November.

London has become the centre of the Nigerian art market for many reasons. Of course the capital is home to a large Nigerian population (estimated at around a million three years ago) and many more have second homes here, send their children to school or university here, or have business interests that bring them to London regularly.

O’Leary’s aim for the new department is two fold – to bring African art to the wider art world and the international audience, “so to really develop the market so there is much more recognition of Africa in the international art market. At the moment, we’re talking about 0.01 per cent of the auction market is represented by Africa and this is completely at odds with the demographic of the world.”

“As a company, we would love to have more collectors from Africa across other catagories as well. Certainly our collectors from new and emerging markets have proved to be some of our most important and valuable clients over the last few years, and I see that throughout Africa as well. Some of the biggest car collectors, watch and jewellery collectors are from Africa. So as a company I think there is great potential for us in Africa.”