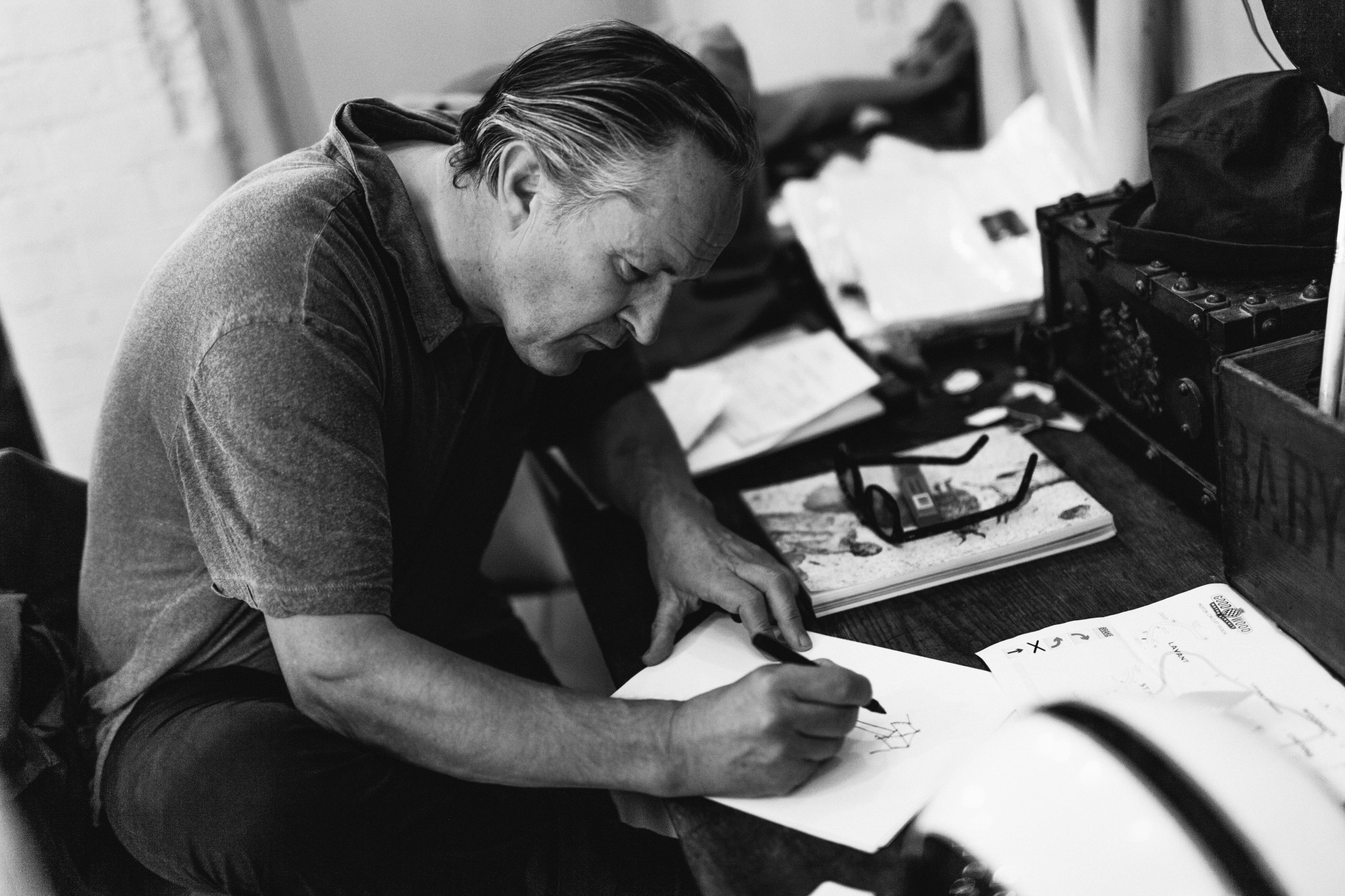 Clothing brand Private White V.C. makes all its garments in its factory in Manchester. We take a tour with designer Nick Ashley

British luxury clothing brand Private White V.C. is at the forefront of menswear in London, standing out as one of the key offerings on Duke Street – the burgeoning style hub gradually becoming the focal point of North Mayfair. But while its name is on the tongues of those with an eye for style, it is still little-known outside of the industry.

By its own admission, the expertly-crafted garments in its collections come with hefty price tags. But while bigger, more established brands charge astronomical prices while manufacturing cheaply, for Private White V.C., the justification is far more palatable: it is dedicated to manufacturing all of its products in its own factory in Salford, Manchester, using the highest quality fabrics and materials available on these shores. “To give us a category,” says designer Nick Ashley, “We’re a ‘makers label’, rather than a designer label. We actually make our own stuff ourselves, and that’s rare.”

For a brand that takes British heritage as a key influence, Manchester is the perfect place for the factory, with its reputation as the world’s first great industrialised city. For Ashley, the factory and the clothes go hand in hand. “There’s a particular look to the product that’s made in this factory; it’s tough, it’s practical and there’s no bullshit – like Manchester itself. These clothes are built to last.” He says that he joined Private White V.C. because the factory was directly under the brand’s control. “I was brought up in factories. I just love to have regionally made product, and I love anything that’s not homogenised.” 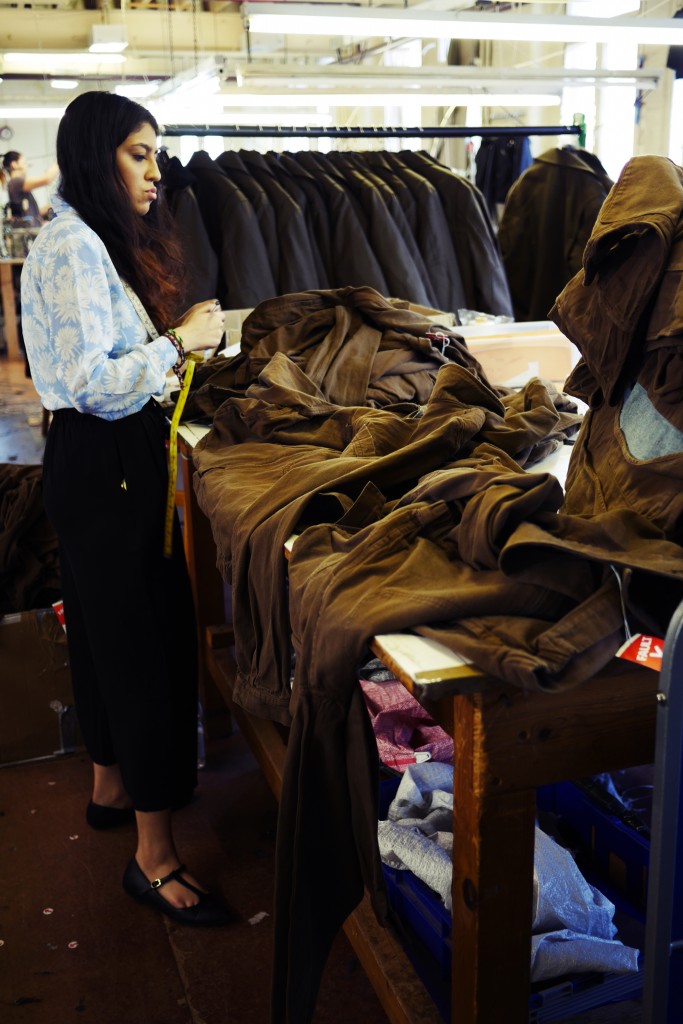 For over 70 years, the factory took on exclusively third party work, creating garments for some of Britain’s most well known luxury brands including Aquascutum and Burberry. It was this environment that war hero Private Jack White entered on returning to Britain from duty – the soldier awarded the Victoria Cross during World War I. His great-grandson, James Eden, now operates the factory. He explains: “When the dust had settled and he was obliged to return to civilian life, he needed to work to survive, prosper and support his family. The only opportunity where he was from – here – was in raincoats. So he got an apprenticeship in his local factory, which was this building.”

That was in 1919, just a year after war’s end. Over the next few decades, White graduated through the ranks from apprentice to factory owner, before his death in the late 1940s. After his passing, the factory changed hands numerous times over the next half century.

90 years after Jack White first arrived at the factory, it was in danger. Seeing its decline, one-time banker Eden bought the business and invested heavily to save the factory from closure. He soon looked to refocus the factory’s output by launching its own label – Private White V.C., named for his heroic ancestor.

Now, the Salford factory works on 90 per cent own label, and 10 per cent third party – something the team are keen to reduce even further. “We’re trying to restrict the amount we do, but we’re actually not big enough to stand on our own two feet yet. Other brands are difficult to work with. You can’t beat working for yourself,” says Ashley. Alongside the factory, which has doubled in personnel since Eden’s buyout, Private White V.C. operates its 73 Duke Street store and a shop on the ground level of the factory.

It is Ashley who shows me around the building – a rambling Dickensian red brick site perched on the edge of Manchester’s River Irwell. Ashley has been involved in the fashion and textiles industry for longer than he can remember; his mother Laura Ashley and father Bernard’s textile design company became a British institution in the second half of the 20th century. He’s charming, irreverent and warm – with a laugh dirtier than the cutting room floor and eyes hidden behind tinted glasses.

We start at the top of the building. Here, pattern cutters do it the old fashioned way, cutting shapes from card. Cut patterns are put together in bundles and sent to the other end of the cutting room floor to be sorted. These are wrapped in rolls and sent downstairs to be made up. 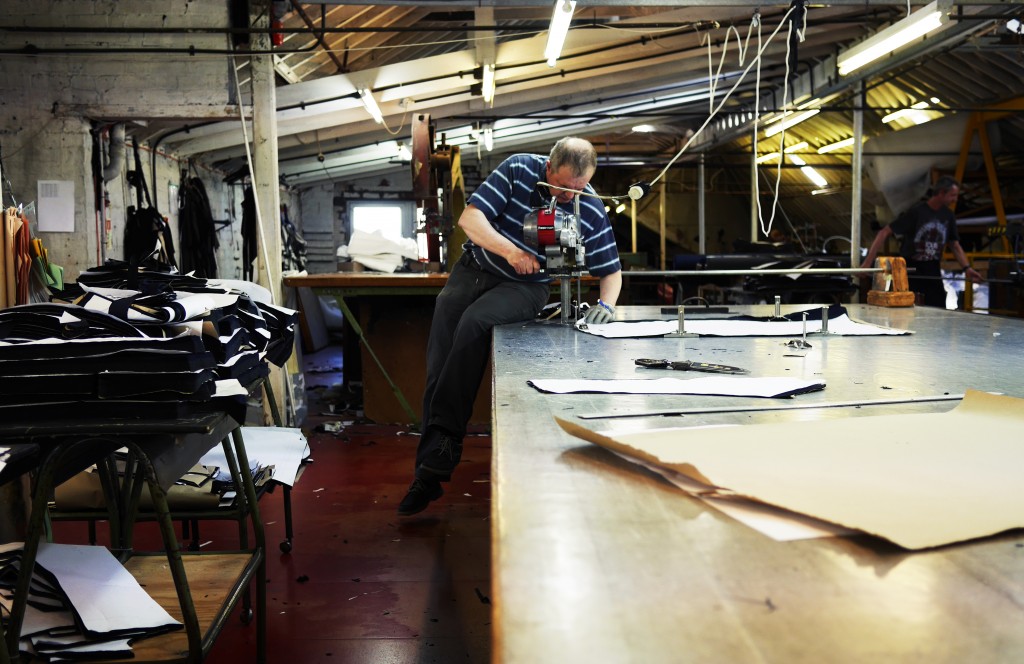 Heavy-duty machinery sits battered, worn and regal. A T. Walker & Co. bandsaw, emblazoned with its ‘Made in Manchester’ seal of approval, is at least 100 years old, according to Ashley. As would be expected, it’s a full-time job keeping vintage machinery running. “We have a special guy that comes in to fix it. He’s a fantastic gypsy type – a big open shirt and medallion. He turns up on an old motorbike to impress the machinists.”

As we wander across wheezing floorboards, I spot a huge, heavy-looking wooden box emerge through the floor. Ashley tells me it comes from ground level, where the weighty fabric is unloaded with forklift trucks and placed in this box, to be pulled up through the middle of the factory on its way to the cutting room. All this fabric will be cut, bundled and made up, gradually making its way down, back out of the factory again. The complete, exhaustive process of turning untouched material to finished product is called ‘converting’.

We descend down a narrow staircase to the assembly floor. It’s a bright room – the sun pours through the open windows, the breeze from the street tousling makeshift curtains made from thin, white fabric. Here, workers make up the clothing on Singer machines, thread strung to needles like spiderwebs. Machinists either repeatedly craft component parts, like collars; or complete a whole garment in one go. “It’s more satisfying working like that,” says Ashley.

As a modern day factory in Britain, the welfare of workers is paramount. “We don’t dictate to them how they should do things. It’s a question of working with them, seeing which system they prefer. The same goes for working hours and pay.” Ashley believes that a contented workforce leads to superior clothing; Eden agrees, even setting up initiatives to better support the factory’s employees. “We invest heavily in the people. We do English lessons three times a week here at the factory, to integrate and assimilate. We also run apprenticeship and graduate schemes – we’re always looking to hire and recruit more people.” 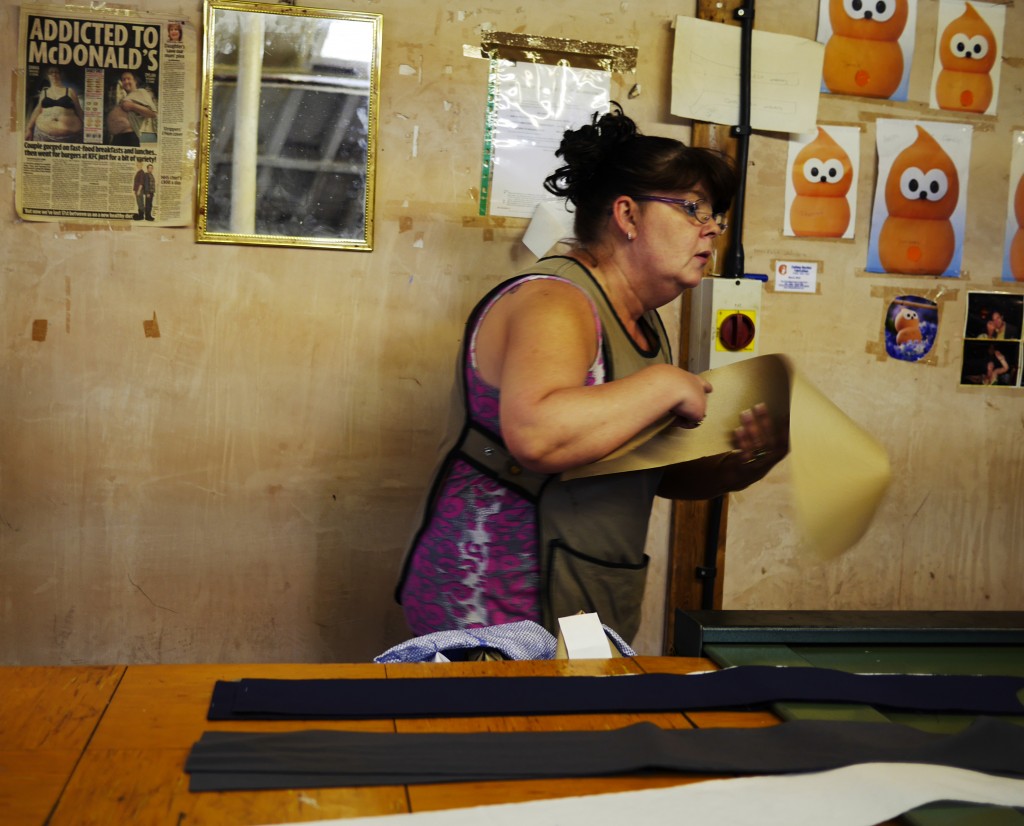 Another floor down, and there are less sewing machines and more computers. Brutus – the office bulldog – wanders over, yawns, and goes back to his bed. This is where a lot of the admin gets done – and where a gargantuan Gerber machine prints a lay plan to be sent to the cutters at the top of the factory. The lay plan ensures the templates are butted up tightly together, to make the use of cloth more efficient. “If you have cashmere coats that are £200 a metre, you don’t want to be wasting too much cloth…”

Ashley has one more hidden space to show me. Behind an unassuming door is a dark, cluttered space. This is the archive – which, according to the designer, contains “pretty much everything that the factory has ever made,” alongside original patterns for each garment. Ashley often comes in here for inspiration – and to know what to avoid. “I’m not so much a designer as an evolutionist. I’m the person responsible for writing the DNA for Private White, so it’s worth knowing what Burberry do with a trench coat, so I don’t do it,” he says.

Eden says that after five years, the brand is going from strength to strength – but it’s still early days. “We want to sell more, we could be selling more, we should be selling more in my opinion – but people are dignifying us with some fabulous press; aligning us with some fabulous brands that have honest values; and actually I think we’re doing an amazing thing in what are difficult times.”

But according to Ashley, Private White V.C. is less understood here than abroad. “Not very many British people appreciate the fact that we’ve got our own factory and that we’re making all this stuff. People from abroad care more.” He says that the increased interest from foreign markets is a factor in where the brand focuses its energies. “70 per cent of our sales come from abroad. The sales say everything.” Interestingly, the team find that the biggest interest comes from Germany, closely followed by America. “Germans love British things, and they have a fascination with handcrafted goods. They’re the leading, green eco-warriors of Europe, so they’re into locally-sourced products.”

While in Britain it is so far just “cool, early adopters” of the brand, the team say that it’s changing. “With the advent of the internet and social media, people are finding us on a daily basis. How they’re finding us, who knows – but it’s happening, and it’s very exciting,” says Eden. He thinks that the perception of the brand as a ‘small’, new company is working in its favour. “The truth is, this is a family-run enterprise where everything is made on site, here in Manchester. I think people can feel an attachment to us.”

So what do the next few years have in store for the brand? For Eden, it’s all about taking it one step at a time. “We’d just like to continue growing organically. Our wholesale business is very important to us. Stores from across the world approach us on a regular basis – it gets our name out there, and it gets people intrigued.” He says that when the time is right, the brand will look to bolster its portfolio with another site – while also strengthening its online presence. “I think there is opportunity and appetite for a space in Tokyo, New York, San Francisco – or maybe Hamburg. But like any forward-thinking business, online is possibly the most important channel for us.” 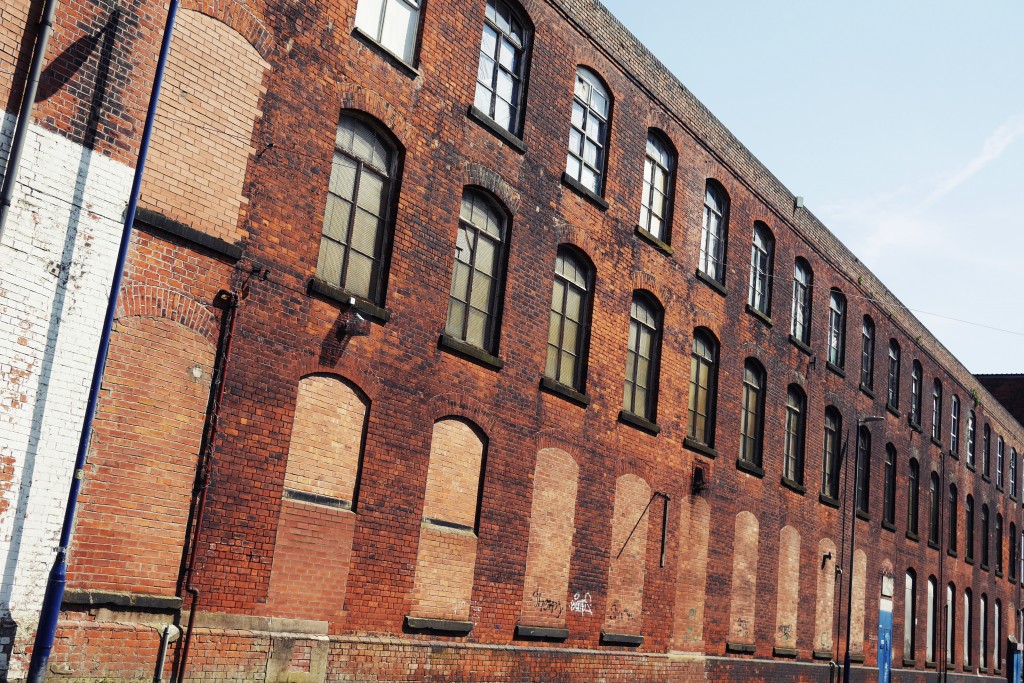 For Ashley, the brand is at the stage he finds most stimulating. “This is the sweet spot, because it’s the start-up period. Once it gets into large volumes, complacency, meetings and fat cat territory, I’m heading for the hills,” he says. “I’ll be looking for another start-up to be honest – I love it when it’s really edgy; you’re never really sure what’s going to happen tomorrow.” But Ashley is not one to rest on his laurels. “Like all designers, I’m only as good as my last collection. If I do a shit job, they need to kick me out and replace me, because they can’t afford to carry me just because I’m their mate. They need to be super tough, because there are a lot of jobs at stake.”

For now, the team is enjoying how far Private White V.C. has come – despite initial reservations from some of the old guard. “When I first started repositioning the business, there was a lot of cynicism and dubious eyes and mouths – they saw me as a young upstart who didn’t know what he was doing. But we exported to over 45 countries last year, from the same building and machinery that not so long ago were deemed to be insolvent, inadequate and unwanted. It’s very rewarding.”